NEET-PG Counselling Protest: Why Junior Doctors Are On Strike And What Are Their Demands

The doctors have been protesting in front of the Union Health Ministry's office for over 11 days now and the protest itself has stretched for close to a month. The strike has also started affecting the people as several patients could be seen waiting for medical treatment outside hospitals but to no avail. 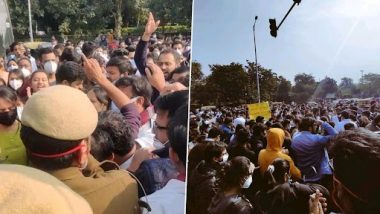 New Delhi, December 28: At a time when projections are grim and fears abound that India might have to ramp up its medical infrastructure given the Omicron variant of the novel Coronavirus cases increasing, the news of junior government doctors going on strike demanding to expedite the admission procedure after delay in the counselling of students after the NEET-PG entrance examination is a cause of worry for both the government and the masses. The doctors have been protesting in front of the Union Health Ministry's office for over 11 days now and the protest itself has stretched for over a month. The strike has also started affecting patients with images of people waiting outside hospitals for treatment without any success coming in. NEET PG Counselling: Resident Doctors of Government Hospitals in Delhi to Continue Protest Against Delays in Exam

On Monday, amid the chilly Delhi winter, the junior doctors also took out a rally shouting slogans, urging the authorities to pay heed to their demands. According to multiple reports and images shared on Twitter, police authorities can be seen trying to curb the protests. However, the doctors continued with their protests and are pressing for their demands to be met.

Images From the Protest Last Night Below

So Why Are The Doctors Protesting?

The doctors have been raising their voice against the delay in the academic counselling of candidates who had cleared the postgraduate National Eligibility Entrance Test (NEET-PG) and have now intensified their protests in what they call as "unjustified" delay in the procedure. The delay in the counselling process means that around 50,000 MBBS doctors who do the work of attending to emergency patients have been missing in action since they cannot join before the counselling is completed. The NEET-PG is held by the National Testing Agency (NTA), which falls under the Union education ministry.

The students who pass the examination join for three-years as junior residents and look after patients as per the work allotted to them. This helps the doctors and the medical workforce share the workload. The delay in the counselling process means a delay in the NEET-PG students joining the medical workforce, which affects both the work pressure of the doctors as well as adding the woes of the patients, say the doctors protesting.

Meanwhile, FORDA in a statement alleged "police brutality" during the march, calling a complete shutdown of all healthcare institutions from Monday onwards.

"There will be a complete shutdown of all healthcare institutions today onwards. We strongly condemn this brutality and demand immediate release of FORDA Representatives and Resident doctors," the statement issued on Monday read.

(The above story first appeared on LatestLY on Dec 28, 2021 11:09 AM IST. For more news and updates on politics, world, sports, entertainment and lifestyle, log on to our website latestly.com).