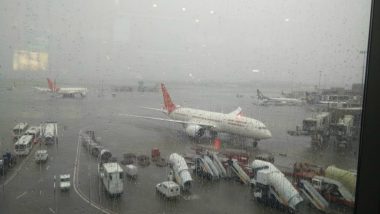 Mumbai, June 3: Maharashtra braced for the onslaught of the Cyclone 'Nisarga' currently hovering around 175 kms from south-southwest of Mumbai -- which is expected to make a landfall near Harihareshwar in adjoining Raigad district sometime on Wednesday afternoon.

All emergency services, the police, fire brigade, NDRF and SDRF, Army, Navy, Air Force, Coast Guard, Home Guards and others are fully geared for the anticipated fallout of the cyclone, while the domestic flight operations have been curtailed as a precaution. Cyclone Nisarga to Make Landfall in Maharashtra's Alibaug Between 1 to 4 PM, Wind Velocity in Mumbai to be 110 Kmph: IMD.

Slated to hit Raigad at a dizzying wind speed of 110-120 kmph over the next six hours, it is very likely to intensify into a severe cyclonic storm, the effects will be experienced in the entire Konkan coastal region and adjoining districts of western Maharashtra, said IMD, Mumbai.

The IMD has also warned of a storm surge of 0.5 to one meter, which is going to inundate areas up to two kilometres in Maharashtra's Raigad and Thane districts.

The Mumbai International Airport Ltd. announced on Wednesday that it will operate only 19 flights -- including 11 outgoing -- instead of the regular 50 daily, in view of the cyclone.

The flights shall be operated by Air India, AirAsia, IndiGo, GoAir and SpiceJet subject to possible last-minute changes in schedules,

Mumbai has been battered by continuous rains since Tuesday evening and this morning, several low lying were inundated in the city and suburbs.

While prohibitory orders are clamped in the city, Mumbai Police and other security forces are out in full swing to ensure people don't step out to the sea fronts, promenades or beaches and other open spaces.

Earlier Wednesday, the India Meteorological Department (IMD) issued 'Red Alert' for June 3 for Mumbai, Thane, Raigad, Palghar, Nashik, Dhule, Nandurbar. It will continue on June 4 for Palghar, Dhule and Nandurbar. Alerts have also been issued for Ratnagiri and Sindhudurg districts.

Nisarga comes on the heels of Cyclone 'Amphan' which had killed close to 90 people when it hit eastern India and Bangladesh on May 20, flattening villages, destroying farms and leaving millions without electricity.

(The above story first appeared on LatestLY on Jun 03, 2020 11:05 AM IST. For more news and updates on politics, world, sports, entertainment and lifestyle, log on to our website latestly.com).