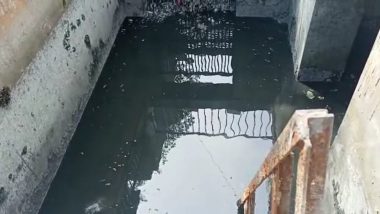 Noida, July 25: Two youths died while two others were left in a critical condition after they entered a sewer tank in Sector 6, Noida, to retrieve a cricket ball on Sunday morning.

The tragedy occurred after a cricket ball fell into a Jal Board sewer plant tank. To retrieve the ball, four youths went inside the tank, but soon fell unconscious, the police said.

As the four youths fainted inside the tank, a rickshaw-puller and the tank operator standing nearby raised an alarm.

After some time, with the help of local people, all the four youths were taken to the hospital, where two were declared dead by the doctors, while the other two were shifted to Delhi's Safdarjung Hospital in a critical condition.

(The above story first appeared on LatestLY on Jul 25, 2021 06:41 PM IST. For more news and updates on politics, world, sports, entertainment and lifestyle, log on to our website latestly.com).