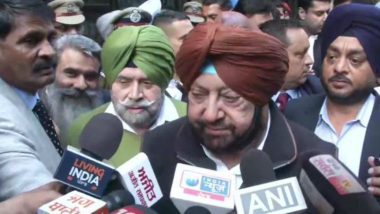 "The hooch tragedy is the direct and natural consequence of the patronage given to Congress leaders, including ministers and MLAs, for freely carrying out rampant illicit liquor trade in the state," SAD's Sukhbir Singh Badal said in a statement. "It is a murder, pure and simple. All the guilty, including ministers and ruling party MLAs, be arrested," he demanded. Badal added that the Chief Minister should resign owning the moral responsibility for this "horrendous crime". Unlock 3: Punjab Allows Gyms, Yoga Centres to Reopen From August 5, Night Curfew Timing Reduced.

Of the 86 deaths, Tarn Taran alone accounted for 63 fatalities, followed by 12 in Amritsar and 11 in Gurdaspur's Batala. CM Amarinder Singh, who has ordered a magisterial probe into the tragedy, on Saturday suspended seven excise officials and six policemen, describing their "failure" to check the manufacturing and sale of spurious liquor as "shameful". He has also announced Rs 2 lakh ex-gratia compensation to each of the families of the deceased.

Urging Badal not to politicise the hooch tragedy, Amarinder Singh said such cases had happened earlier too, including under the SAD-BJP regime. Similar incidents had occurred in 2012 and 2016 in Gurdaspur and Batala respectively. Several lives were lost in these cases too, he pointed out, adding that in the Batala case, no FIR was even registered and no action taken against the main accused.

(The above story first appeared on LatestLY on Aug 02, 2020 10:11 AM IST. For more news and updates on politics, world, sports, entertainment and lifestyle, log on to our website latestly.com).