The 2013 railway bribe scam looked inspired by the Bollywood thrillers of late '70s and '80s in which the villains could be seen carrying one half of a rupee note to match it with the other half as the modus operandi to receive and deliver money. 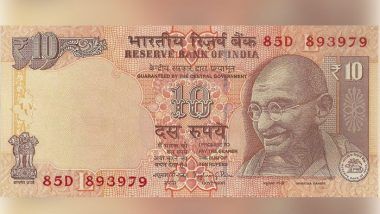 New Delhi, Dec 13: The 2013 railway bribe scam looked inspired by the Bollywood thrillers of late '70s and '80s in which the villains could be seen carrying one half of a rupee note to match it with the other half as the modus operandi to receive and deliver money. A similar tactic of matching the code numbers of Rs 10 currency notes could be seen in the bribery scam, the Enforcement Directorate (ED) has found in its investigation.

The revelations has been made in the chargesheet filed by the financial probe agency earlier this year in a Special PMLA court against several people, including Vijay Singla, the nephew of then Railway Minister and senior Congress leader Pawan Kumar Bansal.

The ED has also named Mahesh Kumar, the then General Manager of Western Railway, and several other private players in the case.

According to the statements of persons who witnessed the arrangement of bribe amount for Mahesh Kumar, a 1975 batch officer of Indian Railway Service of Signal Engineers (IRSSE), for the post of Member (Electrical) in the railway board, which have been viewed by IANS, the Rs 10 note number played an important role as it was the code for the amount meant for the alleged bribery for post of Member (Electrical).

The ED had recorded the statement of Subhash Bhartia, who was managing a firm named Wind Trading of his friend's wife Minati Tufani, on January 10, 2019. In his statement, Bhartia claimed that he was known to Raghuvir Bhuwalka for the last 10-15 years.

"On May 2, 2013, Bhuwalka called him and requested him for the arrangement of Rs 50 lakh in cash in Delhi and also forwarded him a message in this regard and provided the number of the person to whom this amount was to be delivered," the ED said.

The ED said that Bhartia in his statement claimed that he contacted Mahaveer Prasad Pareek of Delhi with the help of Shyamlal of Kolkata and Pareek agreed to arrange Rs 50 lakh in cash in Delhi.

"Bhartia stated that he forwarded the number of the Rs 10 note and contact number of the person to whom the amount was to be delivered and added that he also confirmed the delivery of the aforesaid amount to Bhuwalka," the ED said in its chargesheet.

Even Pareek in his statement to ED on December 27, 2018, claimed that Bhartia was known to him for the last 10-15 years being in the same profession.

Pareek told the ED that he received a message from Bhartia on May 2, 2013 that he was in need of Rs 50 lakh in cash with him and agreed with the request of Bhartia.

The ED claimed that Pareek further disclosed that Bhartia provided him the "number of a Rs 10 note" and a mobile number of Rahul Yadav to whom the payment was to be delivered.

He further stated that he provided the "number of Rs 10 note" and mobile number of Rahul Yadav to his employee Likhma Ram Pareek and sent the amount through him, who made the delivery of the aforesaid amount at Chandni Chowk.

Even Likhma Ram in his statement to the ED on January 10, 2019 claimed that on May 2, 2013, Pareek gave him a bag containing Rs 50 lakh along with the number of a Rs 10 note and contact number of the person to whom the amount was to be delivered.

Likhma Ram told ED that he delivered Rs 50 lakh at Kuchha Mahajani in Chandni Chowk to the concerted person on the instruction of Pareek.

Meanwhile, Vijay Kumar Marwaha in his statement to the ED on April 13, 2018 stated that he used to work as accountant with Venkateshwara Rail Nirmana Limited, Solar LED Solution and Blue Nile Inc from October 2012 to May 2013 and Rahul Yadav and Sameer Sandhir were known to him through these companies.

When asked about the arrangement of any payment on behalf of Yadav and Sandhir to be paid to Singla and others at Chandigarh, Marwaha stated that on the directions of Yadav, he had filled two cheques for Rs 10 lakh and 2.5 lakh, respectively, for self withdrawal duly signed by Yadav along with a letter to the concerned bank for release of cash.

The ED said that when asked about Rs 50 lakh received from a "hawala operator at Chandni Chowk", Marwaha said that he could not remember the exact details as he suffured from Type 2 diabetes, hyper tension and old age as he was 66.

Marwaha submitted that as far as he could remember, he visited Chandni Chowk with Sandhir as accountant of their company and Sandhir made a call from his mobile and collected a bag.

The ED has also demanded punishment for those named in the chargesheet and confiscation of their assets. The ED case is based on the FIR and chargesheet filed by the Central Bureau of Investigation (CBI) against Mahesh Kumar, Singla, Goyal and seven other accused persons.

The CBI had caught Singla red-handed while accepting a bribe of Rs 89.68 lakh for the favourable posting of Mahesh Kumar. The ED in July this year questioned Bansal for several hours in Chandigarh in connection with the case.

In May last year, the ED had attached the Rs 89 lakh amount which the CBI seized from the office of Bansal's nephew Singla in 2013 in the corruption case related to appointments at top positions in the railways, when the Congress leader was the Union Railway Minister in the United Progressive Alliance-2 regime.

Bansal had to step down from his post after the controversy.

Singla demanded Rs 10 crore through Sandeep Goyal from N. Manjunath to get Mahesh Kumar posted as Member (Electrical), the ED had said, quoting the CBI probe.

(The above story first appeared on LatestLY on Dec 13, 2020 11:52 AM IST. For more news and updates on politics, world, sports, entertainment and lifestyle, log on to our website latestly.com).