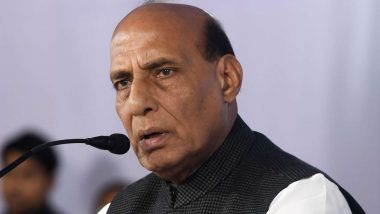 On Saturday, August 15, India will celebrate the 74th Independence Day. Prime Minister Narendra Modi will unfurl the National Flag from the Red Fort and address the nation from the ramparts of the iconic monument. Indian Independence Day 2020: How a Pandemic Made Us Realise The Value of Freedom in the Truest Form.

Raksha Mantri Shri @rajnathsingh message to the Indian Armed Forces on the eve of Independence Day will be broadcasted at 5.45 pm today on ‘Akashvani’. Do tune in! pic.twitter.com/S5urcikLPK

Meanwhile, the Delhi police has requested the invitees of the Independence Day to follow guidelines issued by Union Home Ministry and Health Ministry at all times while they are in the function area at Red Fort. Around four thousand security personnel will be deployed for the ceremony and they will stand maintaining social distance.

(The above story first appeared on LatestLY on Aug 14, 2020 05:18 PM IST. For more news and updates on politics, world, sports, entertainment and lifestyle, log on to our website latestly.com).