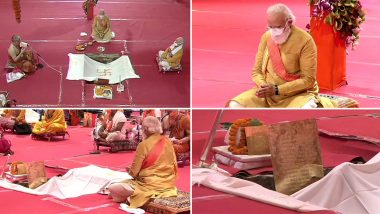 Ayodhya, August 5: Prime Minister Narendra Modi laid a 40-kg silver brick to symbolise the start of construction of the proposed Ram temple in Ayodhya on Wednesday. As part of "Bhumi Pujan" for the construction of the Ram Mandir, PM Narendra Modi the "Shila Pujan", "Bhumi Pujan" and "Karma Shila Pujan". The proposed Ram temple would have a height of 161 feet along with five domes. Ram Mandir Bhumi Pujan Live News Updates.

Prior to the "Bhumi Pujan", PM Narendra Modi visited Hanuman Garhi temple where he offered prayers and then proceeded to the Ram Janmabhoomi complex where he offered prayers to Ram Lalla Virajman. The Prime Minister also planted a "Parijat" sapling in the temple complex and then proceeded for the "Bhumi Pujan" ceremony. The construction of the temple is likely to be completed in the next three years. LK Advani on Ram Mandir Bhumi Pujan: 'Historical, Emotional Day...Dream Getting Fulfilled'.

The Supreme Court had in November last year directed the central government to hand over the site at Ayodhya, where Babari Masjid once stood, for the construction of the Ram temple and set up a trust for this. The five-judge bench said that the Sunni Waqf Board, which was a party to the 7-decade-old title suit, should be given an alternate five-acre land at some other suitable place for construction of a mosque.

Following the Supreme Court's verdict, the Ram temple is built on the site where Babari Masjid once stood. The mosque was demolished by "karsevaks" on December 6 in 1992. Hours before the "Bhumi Pujan" of the Ram temple in Ayodhya, the All India Muslim Personal Law Board (AIMPLB) said that the Babri Masjid will remain a mosque because once a mosque is established at a spot, it remains one till eternity.

(The above story first appeared on LatestLY on Aug 05, 2020 12:45 PM IST. For more news and updates on politics, world, sports, entertainment and lifestyle, log on to our website latestly.com).