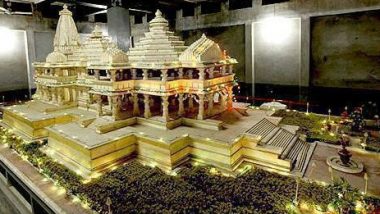 Prayagraj, July 30: The soil and water from Sangam -- the confluence of Ganga, Yamuna and mythical Saraswati -- will reach Ayodhya on Thursday for the 'bhoomi pujan' of Ram temple in Ayodhya on August 5.

The soil and water were handed over to Vishwa Hindu Parishad (VHP) leaders amidst chanting of mantras on Wednesday. A three-member delegation of the VHP is taking the sacred soil and water to Ayodhya. Soil from the Gorakhnath temple in Gorakhpur has also been sent to Ayodhya for 'bhoomi pujan'. Ram Temple Bhoomi Pujan: Ayodhya to Get Rs 500 Crore Worth of Projects on August 5.

According to the VHP spokesman Ashwani Mishra in Prayagraj, "A group of VHP leaders including VHP's Dharmacharya Sampark pramukh Shambhu, and Prant sangthan mantri Mukesh Kumar and Meja resident, Sanju Lal Adivasi, (a Scheduled Tribe man) have collected the sacred soil and water amidst performing pujan through Vedic tradition on Wednesday".

After collecting the sacred soil and water, the VHP leaders took it to Mahavir Bhawan (residence of VHP leader late Ashok Singhal) and recalled Singhal's contribution and efforts for the Ram temple. The VHP workers then took the sacred soil to Keshar bhawan, the VHP office.

"Apart from sacred Sangam water and soil, the soil of Kashi Vishwanath, Shringverpur water, and sacred soil and water of other prominent religious shrines including Kabir Math, Maharshi Bhardwaj ashram, and Sitamadhi would also be collected and sent to Ayodhya before August 5," the VHP leader said.

(The above story first appeared on LatestLY on Jul 30, 2020 10:05 AM IST. For more news and updates on politics, world, sports, entertainment and lifestyle, log on to our website latestly.com).