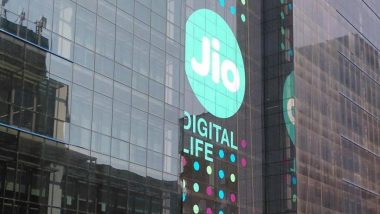 Mumbai, January 1: Reliance Jio Infocomm Ltd (RJIL) has said that there are "blatant efforts" to sabotage its network in the garb of farmers' protest by the channel partners of Bharti Airtel and Vodafone Idea. In letters sent to Anshu Prakash, Secretary, Department of Telecommunications (DoT) and P.D. Vaghela, Chairman, Telecom Regulatory Authority of India (TRAI, Reliance Jio said that a grave situation has emerged in Punjab and Haryana amid the ongoing farmers' protest.

"As a result of false and frivolous communication that Reliance will be an undue beneficiary of the farm bills passed by Parliament, Jio's telecommunications network is being targeted by the protesters and the same is being disrupted and permanently damaged," Reliance Jio said. Jio New Tariff: All Domestic Voice Calls from Reliance Jio to Any Network in India to Be Free from New Year.

Reliance Jio has asked the TRAI and DoT to take action against Vodafone Idea and Bharti Airtel for these unethical and unscrupulous practice of their channel partners. It has also demanded that mobile number portability (MNP) process in Punjab and Haryana be suspended for the time being till the situation stabilises. Airtel Pips Reliance Jio in Monthly New Mobile Subscriber Addition in September 2020 After 4 Years.

It said that the gravity of the situation can be gauged from the fact that there is an outage of 1,504 Jio towers in Punjab which represents 15 per cent of the total number. Similar outages have been reported for 85 Jio towers in Haryana. Reliance Jio said the situation is worsening every hour and it fears that attempts are being made to spread similar situation in more circles.

It said that the damage to the Reliance Jio network in Punjab, Haryana and some other parts is due to the blatant efforts by the distributors, channel partners and retailers of Airtel and Vodafone in a malicious and inciteful campaign to capitalise on the ongoing farmers protest. "The target of the campaign is to disrupt RJIL services and leverage this disruptions to promote MNP to their TSP networks," Jio said.

This is evident from the now common modus operandi of first inciting agitators to disrupt Jio towers and then immediately setting up an MNP camp by them in the vicinity, Jio said. "Thus it is evident that the process of MNP is being misused by channel partners of these TSPs for undue enrichment and creating unrest," the letter said.

It further said Airtel and Vodafone Idea channel partners are seen among the protesters spreading anti-Jio hate speech and boasting about disrupting Jio towers. "We fear that post tasting of success in their ominous campaign, these miscreants have started spreading similar tactics of hate speech in other states as well," Reliance Jio said.

(The above story first appeared on LatestLY on Jan 01, 2021 11:59 PM IST. For more news and updates on politics, world, sports, entertainment and lifestyle, log on to our website latestly.com).