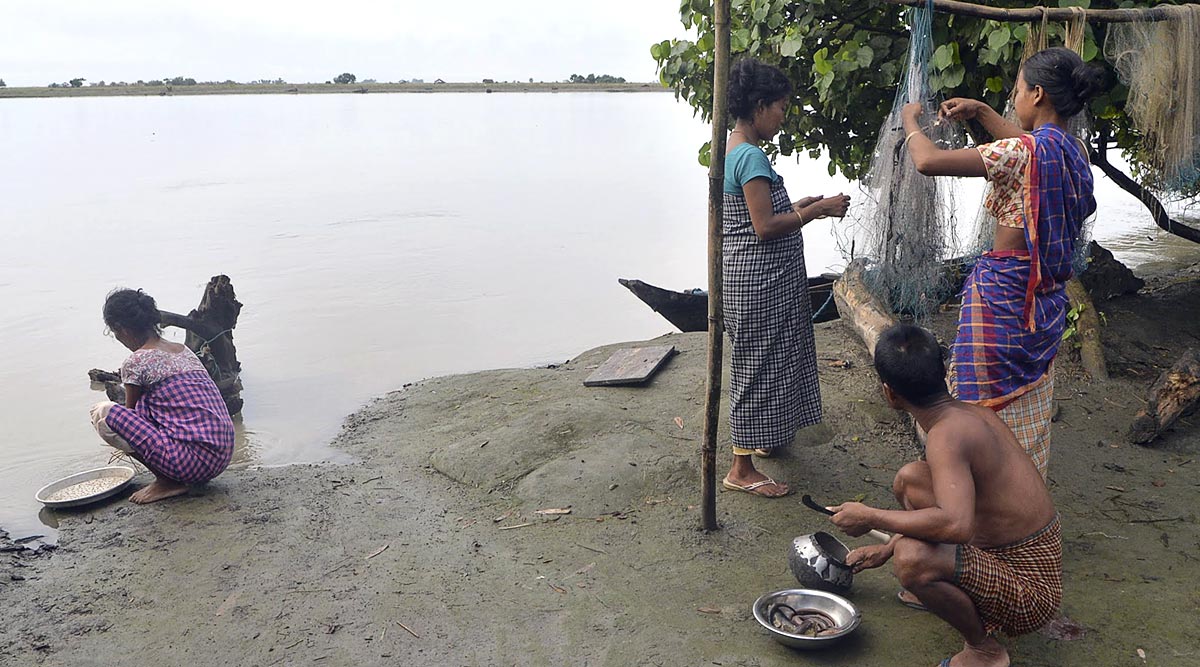 Once a vast river island in the heart of the Brahmaputra, now Majuli's days are numbered: Experts warn it may disappear entirely by 2040 as ever more violent flooding swells the river, wreaking havoc on the lives of those that live along its banks. Millions rely on the vast waterway, which rises in Tibet and runs some 2,900 kilometres (1,800 miles) through the Himalayas to the Bay of Bengal, for their livelihoods but climate change means the deluge from the annual monsoon is increasingly extreme.

Human mismanagement is exacerbating the problem and for Majuli's 170,000 islanders the future looks bleak: the flood waters are submerging more and more areas of the island and for longer periods, wrecking crops and rendering land infertile. Assam Floods: Death Toll Rises to 81, Excess Water from Bhutan Dam Worsens Flood Situation.

The inhabitants -- mostly indigenous Mishings tribespeople who follow a unique offshoot of Hinduism -- move to higher ground with their animals when the rains come, but soon there may be no place for them to migrate up to.

"We love the river but we know it will one day devour all our land. We can only pray that Brahmaputra relents and we can live in harmony like generations before us," says Sunil Mili, a farmer who grows mustard and rice.

India is grappling with a water crisis on all fronts as global warming creates more extreme weather and poor environmental planning puts millions at risk.

The nation is struggling to cope with multiple crises -- from severe drought as well as heavy flooding and rising sea and river levels -- all leading to chronic water shortages.

"The water crisis is expected to worsen as the country's population is set to grow to about 1.6 billion by 2050," says Pradeep Purandare, a former professor with the Water and Land Management Institute.

Majuli, famed for its historic 16th century monasteries, was 1,250 square kilometres (480 square miles) in 1890 but the Brahmaputra's fast-flowing waters have eaten away at it.

Now just 515 square kilometres remain -- and the island could disappear entirely in the next 15-20 years, according to the Majuli Island Protection and Development Council, a local non-profit agency.

It is a reality that Nandiram Payeng knows only too well -- his entire village was swept away by the Brahmaputra.

"We had our houses, farms and cattle in our village. We were content and happy. But in 2007 the river came and took everything away," the widower recalls.

"Now we do cultivation in other people's fields and we need to give them half the harvest," the 55-year-old tells AFP, the creases on his weather-beaten forehead deepening.

Islanders began to leave in the mid-20th century but recently it has become an exodus -- some 10,000 families have been displaced in the past 12 years, according to local officials.

Named after the son of the Hindu deity Brahma -- the river is considered sacred and people place offerings of earthen lamps and flowers to appease it.

"Every year the Brahmaputra is getting bigger. It is losing it depth and is getting wider. It is attacking the banks and eroding our land continually," said Mitu Khatamiar, a local journalist.

Experts say fast melting Himalayan glaciers -- two-thirds of which could disappear by 2100 according to a major report in February -- caused by global warming are a major culprit for the heavy flooding.

The Brahmaputra and many of India's other major rivers are reliant on snow and ice from the mountains, and while an increase in melting means more water in the short term, it's arrival is uncontrolled -- and intense.

Climate change has made the monsoons more unpredictable: they come later, the deluges are heavier, but overall total rainfall has dropped.  "There are sudden showers of high intensity which the region is not used to which has led to catastrophe," says Suruchi Bhadwal, senior fellow, Earth Science and Climate Change at The Energy and Resources Institute.

"Such occurrences may increase in the coming years," she explains adding that glacier melt will initially lead to fuller rivers and a surplus of water.

But there are few provisions in place to harness or conserve water when there's an abundance, and a lack of proper management when there's too little -- leaving people still facing water shortages.

"Water management, governance and regulation is lacking at the national level. Once water is available it should be used efficiently and in an equitable manner," Purandare says.

He adds that while harvesting rainwater is one solution it's vital that industry, agriculture, and communities look at the way they use and can conserve water now.

Prime Minister Narendra Modi recently created the Ministry of Jal Shakti, dedicated to looking at ways to better manage water resources and tackles everything from access to clean drinking water to flood management.

Human encroachment along the river has also added to the problem -- more people live in the Brahmaputra valley than ever before and protective wetlands have been destroyed making way for homes and villages.

Environmental expert Himanshu Thakkar says hundreds of millions of dollars have been spent building concrete river embankments in a bid to mitigate flooding along the Indus.

But this has instead exacerbated the situation by inadvertently speeding up the flow of the river -- making it more dangerous when water levels are high.

Thakkar: "The Brahmaputra is a flood-prone river but we are worsening the situation."