Shiv Sena MLA Pratap Sarnaik, who is under the Enforcement Directorate's scanner for alleged money laundering, has written a letter to Maharashtra Chief Minister Uddhav Thackeray appealing to him to reconcile with the BJP "before it is too late". 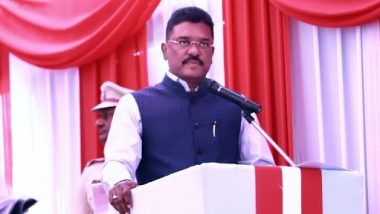 Mumbai, June 20: Shiv Sena MLA Pratap Sarnaik, who is under the Enforcement Directorate's scanner for alleged money laundering, has written a letter to Maharashtra Chief Minister Uddhav Thackeray appealing to him to reconcile with the BJP "before it is too late".

In the letter dated June 10, Sarnaik said even though the alliance with the BJP has broken, personal and  relations between leaders of the 'yuti' (Shiv Sena-BJP) remain. Shiv Sena MLA Pratap Sarnaik Writes to Maharashtra CM. His Letter Reads, 'NCP & ... - Latest Tweet by ANI.

"It is better to reconcile before it is too late," the MLA said in the letter.

Notably, the Sena forged an alliance with the NCP and Congress and formed the Maha Vikas Aghadi (MVA) government in Maharashtra in 2019 after the Uddhav Thackeray-led party fell out with the BJP.

In November last year, the Enforcement Directorate (ED) raided premises linked to Sarnaik in Maharashtra in connection with a money laundering case being probed against a security service provider company and others. The Shiv  Sena had called the raids a "political vendetta" and said the Maharashtra government or its leaders will not surrender to pressure from anyone.

Noting that municipal corporation polls are due soon in several Maharashtra cities, including Mumbai, Sarnaik in his letter to the CM said, "I believe fighting a war like Arjun, instead of sacrificing oneself like Abhimanyu or Karna. This is the reason that I have been fighting my legal battle for the last seven months alone without getting any help from our leaders or our government ."

Sarnaik, who is an MLA from neighbouring Thane district, also alleged that the Congress and NCP were creating divisions in the Shiv Sena ranks."It is better  to join hands with Prime Minister Narendra Modi again as Shiv Sainiks feel that would save the Sena leaders like me, Anil Parab and Ravindra Waikar from problems," he said.

Notably, former BJP MP Kirit Somaiya had accused the three Sena leaders of indulging in corrupt practices. Sarnaik, in his letter, did not name Somaiya, but said a leader "who has become a 'former MP' because of the Sena" is maligning the party.

Sarnaik also said in the letter that while CM Thackeray was focusing only on COVID-19 eradication, the Congress was talking of going alone in next elections and the NCP was busy "breaking" Shiv Sena workers and inducting them into the Sharad Pawar-led party.

Meanwhile, reacting to Sarnaik's letter, Somaiya said the Sena MLA seems to be worried about jail now and so, he has asked CM Thackeray to join hands with PM Modi and the BJP.

"All corrupt leaders of the Shiv Sena - Pratap Sarnaik, Anil Parab, Ravindra Waikar - will have to be in jail," the BJP leader said in a statement. Somaiya also said he had lodged a complaint at a police station in Thane about Sarnaik "missing" for last 100 days.