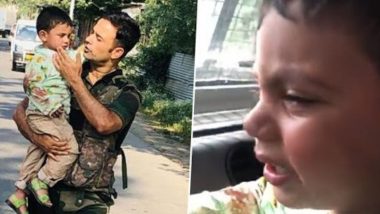 Jammu & Kashmir, July 1: J&K police saved a three-year-old boy from getting hit by bullets during the encounter between the security forces and terrorists in Sopore area on Wednesday. A photo posted by the Kashmir police Twitter handle showed the young boy being carried by a policeman.

In a heart-wrenching video, police are seen trying to console the 3-year-old crying child after they rescued him during the attack. The child was sitting beside his dead relative during the attack when he was rescued.  According to reports, the child was the grandson of the civilian who lost his life in the terrorist attack earlier in the day. Jammu & Kashmir: Terrorists Fire Upon CRPF Patrolling Party in Sopore, Some CRPF Jawans, Civilians Injured.

#WATCH Jammu & Kashmir Police console a 3-year-old child after they rescued him during a terrorist attack in Sopore, take him to his mother. The child was sitting beside his dead relative during the attack. pic.twitter.com/znuGKizACh

JKP #rescued a three years old boy from getting hit by bullets during #terrorist #attack in #Sopore. @JmuKmrPolice pic.twitter.com/hzqGGvG7yN

One personnel of the Central Reserve Police Force (CRPF) and a civilian were killed while two other security force personnel received injuries in the gunbattle. As per reports, three other CRPF jawans have been injured. This was reportedly the second attack on the CRPF in Sopore in the last three months. On April 18, terrorists fired at a CRPF party, killing three personnel.

(The above story first appeared on LatestLY on Jul 01, 2020 11:57 AM IST. For more news and updates on politics, world, sports, entertainment and lifestyle, log on to our website latestly.com).