This is the second time Justice Chandrachud has been part of a bench which has annulled an erstwhile order of the top court. 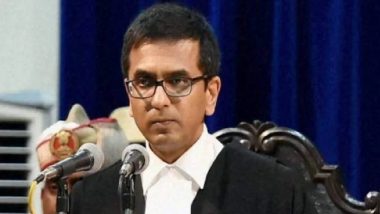 New Delhi, Sept 27: Justice DY Chandrachud, who was part of the five-judge Supreme Court bench which decriminalised adultery on Thursday, has once again overruled an erstwhile verdict by his father, Justice Yeshwant Vishnu Chandrachud.

In 1985, the bench headed by the former judge had upheld the section of adultery, which penalised a woman for extramarital relationship. Overturning the ruling today, the apex court said adultery cannot be considered a crime as it infringes on the sexual freedom of the women. Aadhaar Verdict by Supreme Court: Justice DY Chandrachud Dissents With Majority Judgment, Holds Aadhaar Unconstitutional.

"The adultery law is arbitrary and it offends the dignity of a woman," the bench said, adding that section 497 (of the IPC) treats the woman as a commodity of her husband.

This is the second time Justice Chandrachud has been part of a bench which has annulled an erstwhile order of the top court. Earlier in the year, the bench which included Justice Chandrachud scrapped an earlier order which held right to privacy subservient to national security. Taking a historic step, the Supreme Court ordered that the right to privacy will be considered a Fundamental Right, whose protection is guaranteed in the Constitution.

Notably, Justice Chandrachud was the only judge in the five-member constitutional bench which pronounced its verdict on the Aadhaar case, who opposed the validity of the unique identification programme.

(The above story first appeared on LatestLY on Sep 27, 2018 07:15 PM IST. For more news and updates on politics, world, sports, entertainment and lifestyle, log on to our website latestly.com).