Amit Shah was addressing a gathering at the inauguration of 29 Special Composite Group Complex of NSG at Rajarhat in the northern fringes of Kolkata. 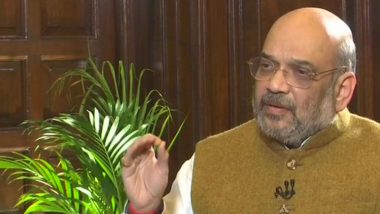 Kolkata, March 1: Surgical strikes by the Indian Army to avenge killings of CRPF troops in Jammu and Kashmir's Pulwama, and airstrikes by the Indian Air Force on terror camps in Balakot have brought India at par with the United States and Israel, said Union Home Minister Amit Shah on Sunday. Amit Shah was addressing a gathering at the inauguration of 29 Special Composite Group Complex of NSG at Rajarhat in the northern fringes of Kolkata. Delhi Violence: Amit Shah Chairs 3rd Meeting in 24 Hours.

"Prior to the surgical strike and air strike only two countries in the world – the US and Israel - were known who can enter enemy territory and avenge the killing of their soldiers. But now I believe India’s name has been added to the list," said Shah. The Home Minister also lauded operations carried out by the National Security Guard and said the elite commandos must instil fear among those who threaten peace within the country. Amit Shah, Mamata Banerjee Share Lunch at Odisha CM Naveen Patnaik's Home; Nitish Kumar Also Join in.

"It is the work of NSG to develop fear in people who think and work towards dividing&disrupting peace in our country. And if these people still don't stop, then NSG should retaliate," Shah said. "In the next five years, all requests placed before the government by the NSG would be met. NSG will be made into a complete commando force be it training, modern weapons, facilities of family members among others," he promised.

Shah, who landed in Kolkata around 11 am and went straight to Rajarhat, said the government will keep NSG at least two steps ahead of other forces in the world. He is also scheduled to address the rally in Kolkata where he will launch a state-wide movement against the Mamata Banerjee government in West Bengal.

(The above story first appeared on LatestLY on Mar 01, 2020 01:19 PM IST. For more news and updates on politics, world, sports, entertainment and lifestyle, log on to our website latestly.com).