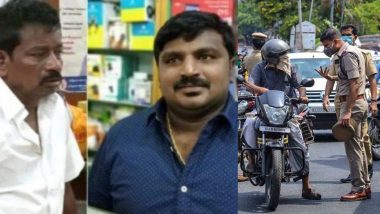 Chennai, June 30: The Tamil Nadu government on Tuesday removed the current Superintendent of Police (SP) of Thoothukudi -- Arun Balagopalan -- and appointed S Jeyakumar as the new SP for Thoothukudi. Jeyakumar was previously appointed as SP of Viluppuram district. The major shift comes days after the reports of custodial deaths of 60-year-old P Jeyaraj and his 31-year-old son J Beniks in Tuticorin. Both of them died at the Kovilpatti Government Hospital.

Releasing a circular about the new change, the Home Department of government of Tamil Nadu informed that S Jeyakumar will be the new Superintendent of Police vice Arun Balagopalan, who is brought to the compulsory wait at Office of the Director general of Police. Apart from this, Dr S Murugan has been appointed as new DGP of South Zone in Madurai. He has replaced KP Shanmuga Rajeshwaran, who is retiring on superannuation on June 30. #JusticeforJayarajAndFenix: Tuticorin Custodial Death Sparks Anger in Tamil Nadu, Netizens Demand Justice For Slain Father-Son Duo

Earlier on Tuesday, Madurai Bench of Madras High Court asked the Tirunelveli IG if it will be possible to take up the custodial deaths case until it is handed over to CBI. The post-mortem reports of P Jeyaraj and his 31-year-old son J Beniks were presented before the bench. Judges said that there are grounds for registering a case against the police officials.

Following the custodial death of P Jeyaraj and his 31-year-old son J Beniks in Tuticorin, wide outrage with #JusticeforJayarajAndFenix trended on social media. Following this, the court had said that the state government must transfer the policemen or it will be "very difficult" to conduct a free and fair inquiry.

(The above story first appeared on LatestLY on Jun 30, 2020 01:37 PM IST. For more news and updates on politics, world, sports, entertainment and lifestyle, log on to our website latestly.com).