A helicopter carrying Uttar Pradesh Chief Minister Yogi Adityanath had to make an emergency landing at the police lines here, minutes after take-off. 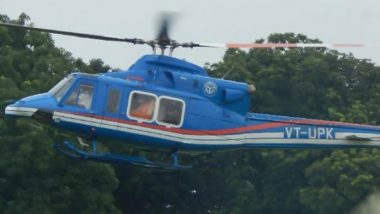 Sources said that the chopper was brought back to the base as a precautionary measure after a reported bird hit. UP CM Yogi Adityanath Promotes Organic Farming Along The Banks of River Ganga.

The Chief Minister, who is in Varanasi, is now going to the airport by road and will return to Lucknow by a state aircraft.

(The above story first appeared on LatestLY on Jun 26, 2022 11:27 AM IST. For more news and updates on politics, world, sports, entertainment and lifestyle, log on to our website latestly.com).