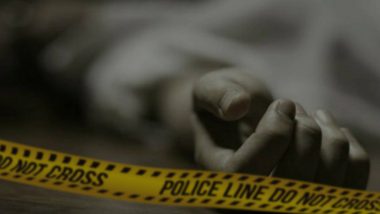 Jhansi, May 24: A 45-year-old man allegedly killed his two sons here and then committed suicide, police said on Monday.

The incident occurred in the Mauranipur area of the district on Saturday, they said, adding, the victims were identified as Rais Yadav and his sons, Harsh (12) and Ansh (8) -- residents of Ranipir town.

Their bodies were found in a well near a temple, Circle Officer Anuj Kumar Singh said, adding that a shaving blade and a brick with blood on it were recovered from the scene. Uttar Pradesh: Young Couple Dies by Suicide on Railway Tracks in Shahjahanpur, No Suicide Note Found.

While the children had injury marks on the head, Yadav had hilt marks on his head and neck, the CO said.

According to preliminary investigation, Yadav, an alcoholic, had an altercation with his wife Archana after she objected to his drinking habits.

Later, he went out for shopping with his kids and decided to take the extreme step after killing the two, police said, adding their bodies were sent for postmortem.