In Uttarakhand, 17 teams of NDRF, 7 teams of SDRF, 15 companies of PAC and 5,000 police personnel have been deployed in rescue and relief operations in the hill state. The Centre has provided Rs 250 crore to Uttarakhand from the Disaster Relief Fund. 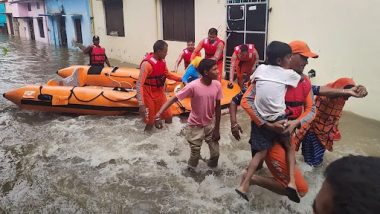 New Delhi, October 21: At least 64 people have died in rain-related incidents in Uttarakhand while 3,500 people have been rescued and more than 16,000 people have been evacuated to safer places, the government said on Thursday. 17 teams of NDRF, 7 teams of SDRF, 15 companies of PAC and 5,000 police personnel have been deployed in rescue and relief operations in the hill state. The Centre has provided Rs 250 crore to Uttarakhand from the Disaster Relief Fund.

The government has decided to send medical teams to water-logged areas to prevent the spread of vector-borne diseases. So far 64 people have died in Uttarakhand due to heavy rain and in rain-related incidents in the past three days. Chief Minister Pushkar Singh Dhami said that the water level of the rivers is being continuously monitored. Uttarakhand Flood: Indian Army Personnel Join Hands to Rescue Stranded People in Nainital, Watch Video.

Union Home Minister Amit Shah on Thursday took stock of the situation by conducting an aerial survey of the disaster-affected areas of the state. He was accompanied by Uttarakhand Governor Lieutenant General (Retd) Gurmeet Singh and Chief Minister Pushkar Singh Dhami.

Amit Shah also chaired a meeting with the authorities to review the situation. He promised all possible help to the state from the Centre. The state government says that the Char Dham pilgrimage was suspended at the right time to avoid any casualty, all the agencies were activated on time. The yatra has resumed now.

According to the Uttarakhand Char Dham Devasthanam Management Board, the helicopter service in Kedarnath, Gangotri and Yamunotri has become smooth and will resume in Joshimath and Pipalkoti soon. Joshimath District Magistrate, Himanshu Khurana and Sub-Collector Kumkum Joshi, who inspected the blocked road in Badrinath on Wednesday, said that debris from villages like Tangri, Benakuli and Lambagad will be cleared before reopening the National Highway.

A large part of Almora Highway has also been completely damaged due to incessant rain. Many roads from Haldwani to Almora and from Almora to Ranikhet and Bageshwar have been damaged which has affected the movement of traffic. Meanwhile, a member of the Devasthanam Management Board, Dr Harish Gaur, said that worship is going on in all the temples of Uttarakhand Char Dham on a daily basis. So far, about two lakh pilgrims have reached Char Dham since the opening of the gates of the temples.

(The above story first appeared on LatestLY on Oct 21, 2021 07:27 PM IST. For more news and updates on politics, world, sports, entertainment and lifestyle, log on to our website latestly.com).