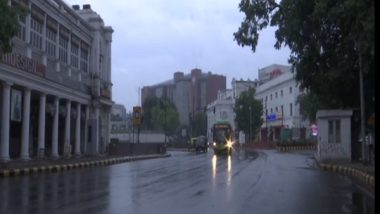 During the next 2 days, there is a forecast of rain with thunder and strong winds in this region. Winds can move at a speed of 40-50 kmph in this area. On May 04, there is a possibility of heavy rain at isolated places over Assam, Meghalaya and Nagaland, Manipur, Mizoram and Tripura. Light or moderate rain and thundershowers are expected over Bihar, Jharkhand and Odisha during the next 3-4 days. Weather Update: Record Not Just for Max But Also for Minimum, Mean Temperatures & Rainfall in April 2022

During 04-05 May, widespread rain and thundershowers are very likely to occur over the Western Himalayan region. Hail may also occur in this area during May 04. There is a possibility of heavy rain in Jammu and Kashmir even today. During the next 2 days, light rain with dust storm is likely over Punjab, Haryana, Uttar Pradesh and Rajasthan. Weather Forecast: Heatwave Continues in North, Central India; Heavy Rainfall Likely Over Sub-Himalayan West Bengal, Sikkim, Assam and Arunachal Pradesh, Says IMD

During the next 5 days, scattered rain with strong winds is very likely over Kerala, Karnataka, Tamil Nadu, Andhra Pradesh and Telangana. There is a possibility of heavy rain in Kerala on May 04. There is a possibility of rain in Tamil Nadu and Puducherry on 05 May and Andhra Pradesh on 03 May. Heavy to very heavy rainfall very likely at isolated places over Nicobar Islands on 04 & 05 and Andaman Islands on 06 & 07 May. In view of this, the Meteorological Department has issued a warning to the fishermen of the coastal areas.

The India Meteorological Department said on Tuesday that the heat wave has subsided in all parts of the country and the maximum temperature has further declined by two to four degrees Celsius in Rajasthan, Punjab, Delhi and Haryana. The Meteorological Department said that there is no possibility of severe heat in any part of North West, Central and East India for the next five days.

Temperatures were at an all-time high in April at many places across the country with mercury reaching 46 to 47 degrees Celsius. Banda in eastern Uttar Pradesh recorded a temperature of 47.4 degrees Celsius on Friday, which is the highest temperature in April.

(The above story first appeared on LatestLY on May 04, 2022 11:08 AM IST. For more news and updates on politics, world, sports, entertainment and lifestyle, log on to our website latestly.com).