India is dependent on imports to meet 85 per cent of its oil needs and so retail rates adjust accordingly to the global movement. In March, inflation in crude petroleum spiked to 83.56 per cent, from 55.17 per cent during February. Crude oil prices had mostly been on rise in March, after Russia started the invasion of Ukraine on February 24. 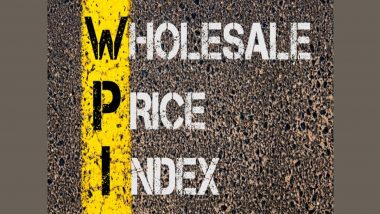 New Delhi, April 18: The wholesale price-based inflation spiked to a four-month high of 14.55 per cent in March on rising prices of crude oil and other commodities due to disruption in global supply chain in the wake of the Russia-Ukraine war, a development that may prompt the RBI to raise interest rates to contain price rise. In February, WPI Inflation was at 13.11 per cent, while in March last year, it was 7.89 per cent.

WPI inflation has remained in double digits for the 12th consecutive month since April 2021. In November 2021, it had touched a high of 14.87 per cent. The data released by the Commerce and Industry Ministry on Monday, showed that crude oil prices were the biggest contributor to the rise in WPI inflation in March 2022, relative to February, followed by fuels and core items.

Food articles witnessed some softening month-on-month led by vegetables and pulses, even though wheat, paddy, potato, milk, egg, meat and the fish basket saw moderate increases during March. During March, inflation in food articles eased to 8.06 per cent, from 8.19 per cent in February. Vegetable inflation was 19.88 per cent in the month under review, as against 26.93 per cent in February. Sensex Sharply Declines by 970 Points in Early Trade Due to Rising Inflation.

"The high rate of inflation in March, 2022 is primarily due to rise in prices of crude petroleum and natural gas, mineral oils, basic metals, etc owing to disruption in the global supply chain caused by the Russia-Ukraine conflict," the Commerce and Industry Ministry said in a statement. Inflation in manufactured items was 10.71 per cent in March, as against 9.84 per cent in February.

In the fuel and power basket, the rate of price rise was 34.52 per cent during the month under review, against 31.50 per cent in February. Oil companies had begun to pass on the high import cost of global crude oil prices by hiking domestic petrol and diesel prices from March 22 -- ending a four-and-half-month long hiatus. Besides, domestic cooking gas (LPG) prices were hiked during the month.

India is dependent on imports to meet 85 per cent of its oil needs and so retail rates adjust accordingly to the global movement. In March, inflation in crude petroleum spiked to 83.56 per cent, from 55.17 per cent during February.

Crude oil prices had mostly been on rise in March, after Russia started the invasion of Ukraine on February 24.

ICRA Chief Economist Aditi Nayar said even a normal monsoon may not be enough to douse the retail prices of items which are pushing up food inflation, such as edible oils. ICRA expects the WPI inflation to remain in the range of 13.5-15 per cent in the current month, partly depending on where crude oil prices settle in the rest of April 2022 and how much petrol and diesel prices are revised further.

"The broad-based nature of the rise in WPI inflation is likely to be of particular concern to the Monetary Policy Committee. We see a growing probability of the first repo hike being preponed to June 2022," Nayar said. Acuité Ratings & Research, Chief Analytical Officer, Suman Chowdhury said the WPI data reinforces the presence of stronger inflationary pressures in the manufacturing and the services sector.

"Amidst increasing pressures on the profit margins of manufacturing companies and a pickup in consumption demand, Acuité expects a further pass through of input costs. We expect persistent supply side bottlenecks and high commodity prices to hold the core inflation at double-digit levels in the near-term," Chowdhury said.

Retail inflation, which is monitored by the RBI to fix interest rates, spiked to 6.95 per cent in March -- the third consecutive month that the consumer price index has breached the RBI's tolerance limit of 6 per cent, data released last week showed.

The Reserve Bank earlier this month kept its key repo rate -- at which it lends short-term money to banks -- unchanged for the 11th time in a row at 4 per cent, to support growth. Passenger Vehicle Exports From India Rise 43% in FY22; Maruti Suzuki Leads Segment.

CRCL LLP, CEO and Managing Partner, D R E Reddy said, faster growth in prices is bound to harden inflation expectations going forward. This has the potential of creating a vicious cycle of inflation and inflationary expectations feeding into and off each other, he said.

Earlier this month, the RBI raised the retail inflation projection for the current financial year to 5.7 per cent, from earlier forecast of 4.5 per cent. In wake of the ongoing Russia-Ukraine war, RBI Governor Shaktikanta Das said the prices of crude oil as well as edible oil will likely remain elevated.