Yasin Malik Seeks To Play ‘Gandhian Card’ Ahead of Sentencing

Kashmiri separatist leader Yasin Malik, who has been convicted in a terror funding case, on Wednesday told the court that he has been following "Gandhian principles" after giving up arms. 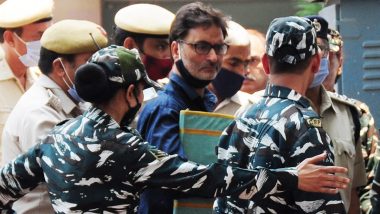 New Delhi, May 25 : Kashmiri separatist leader Yasin Malik, who has been convicted in a terror funding case, on Wednesday told the court that he has been following "Gandhian principles" after giving up arms.

Malik, who is awaiting the quantum of punishment for the offences in the case, was produced before the Special NIA judge, Patiala House Court amid tight security.

During the course of the hearing, Malik said: "After dropping weapons, I have followed principles of Mahatma Gandhi. Since then, I have been following non-violent politics in Kashmir."

The National Investigation Agency (NIA) argued for the death sentence for Malik. Yasin Malik Convicted by NIA Court in Terror Funding Case; Watch Video of Kashmiri Separatist Being Brought out of Court.

The court also had directed the NIA authorities to assess his financial situation in connection with the terror funding case prior to Wednesday's hearing.

The accused is facing a maximum punishment of the death penalty, while the minimum sentence can be life imprisonment in the cases in which he is involved.

Malik has been charged with hatching a criminal conspiracy, waging war against the country, other unlawful activities, and disturbing peace in Kashmir.

(The above story first appeared on LatestLY on May 25, 2022 05:16 PM IST. For more news and updates on politics, world, sports, entertainment and lifestyle, log on to our website latestly.com).