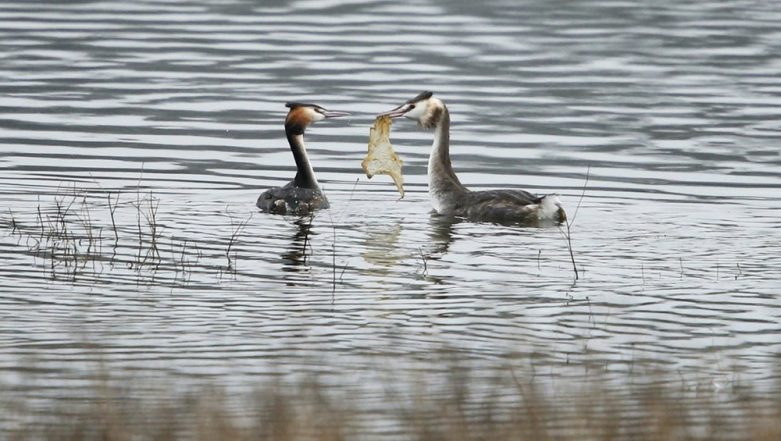 New Delhi, May 11: Eliminating single-use plastics can help save the lives of waterbirds, lakhs of whom fall prey to the devastating impact of plastic pollution and die, according to experts. At a lecture organised by National Mission for Clean Ganga (NMCG) society on the eve of 'World Migratory Bird Day' in New Delhi on Friday, experts pointed out that collective efforts such as eliminating the use of plastics and preserving wetlands can contribute to saving migratory birds. The NMCG has resolved to reduce plastic pollution. At the event, Dr. Fayiaz A Khudsar, ornithologist and wetlands conservation expert, shared disturbing impact of plastic on the birds and also emphasised on the importance of wetlands for the migratory birds.

"Having wings does not protect birds from plastics. Birds ingest plastic in their food and get entangled and smothered by plastic rings and nets. This takes a toll on the already vulnerable wildlife," he said. "The river is a living system, restoring wetlands is the most efficient way of saving birds." NGT Forms Committee on Ganga Cleaning, Says Meticulous Monitoring Required.

The ornithologist also shared case studies of locations like Yamuna Biodiversity Park, Sanjay Van (Vasant Vihar) and Neela Hauz that are not only scenic but are now thriving as biodiversity hotspots. Rajiv Ranjan Mishra, Director General, NMCG who was present at the event said it was the second consecutive year that the NMCG is holding a lecture on 'The World Migratory Bird Day'.

This year's theme of the World Migratory Bird Day is 'Protect Birds: Be the solution to Plastic Pollution'. According to statistics, a shocking one million sea birds die of plastic pollution every year. Sandeep Behera, Senior Biodiversity Consultant, NMCG who participated in the event gave information on the various kinds of migratory birds including Amur Falcons, Bar-headed Geese, Black-necked cranes, marine turtles. He also emphasised the requirement of collective effort to save these birds.

National Mission for Clean Ganga or 'Namami Gange Programme', is an Integrated Conservation Mission, approved as a flagship programme by the Union Government in June 2014 with a budget outlay of Rs 20,000 crore to accomplish the twin objectives of effective abatement of pollution, conservation and rejuvenation of National River Ganga.