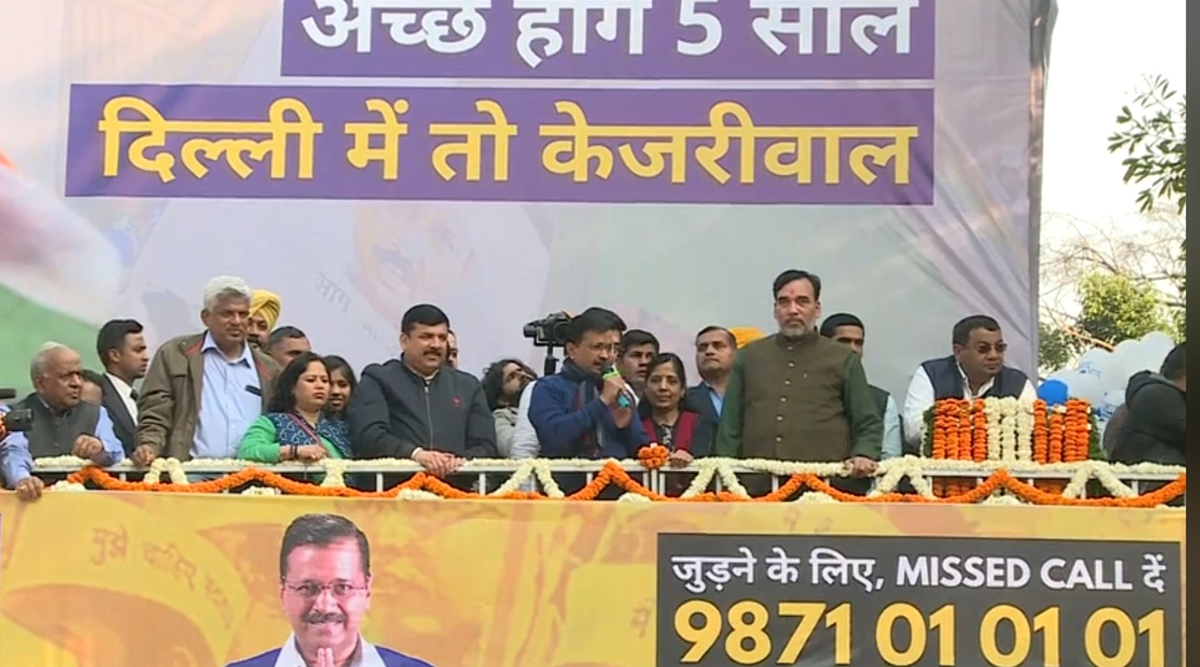 New Delhi, February 11: After Aam Aadmi Party registered another landslide victory in Delhi, Chief Minister Arvind Kejriwal thanked people of the national capital for showing trust in him. While addressing AAP workers, Arvind Kejriwal said that the victory in the Delhi Assembly elections 2020 belonged to all those who got a better education and health facilities. He added that people of Delhi has voted for the development work including construction of schools and providing cheap electricity to people. Expressing his happiness, Kejriwal said, “I love you Delhi.”  Delhi Assembly Elections 2020 Results Live News Updates.

The Delhi CM said that, the victory of AAP is not only the victory of Delhi but also of entire country. Kejriwal also sought blessings from the almighty to give him the strength to keep doing efficient work for the development of the national capital. He stated, "This is the day of Lord Hanuman who has blessed the people of Delhi. We pray that Hanuman Ji keeps showing the right path to us so that we continue to serve people for the next five years."

In the end, he thanked AAP workers and his family for this victory. The Delhi CM said that AAP's victory is is the beginning of a new kind of politics in the country. Kejriwal ended his speech with slogans of "Bharat Mata ki jai" and "Vande Matram". Delhi Assembly Election Results 2020 Winners' List Live Updates: Check Constituency-Wise And Party-Wise Names of Winning MLAs of AAP, BJP, Congress.

AAP chief Arvind Kejriwal: This is the day of Lord Hanuman who has blessed the people of Delhi. We pray that Hanuman Ji keeps showing the right path to us so that we continue to serve people for the next five years. #DelhiElectionResults pic.twitter.com/sXA2nA27uo

In these assembly elections, the AAP recorded a resounding victory for the second consecutive time. As per latest trends, the Kejriwal-led party is leading on 63 seats, while the Bharatiya Janata Party (BJP) is ahead in remaining seven seats. Kejriwal and other AAP key candidates, including Manish Sisodia, Atishi and Raghav Chadha won their respective constituencies. The Congress once again failed to open its account in the national capital territory.