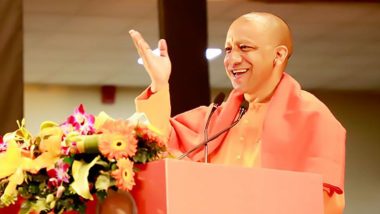 New Delhi, March 10: The latest counting trend shows that the Aam Aadmi Party is heading for a landslide victory in Punjab assembly elections while the BJP is to retain power in Uttar Pradesh, Uttarakhand, Goa and Manipur with a comfortable margin, according to the Election Commission's latest update at 5 p.m.

In Uttar Pradesh, the ruling BJP has won 25 seats in UP and is leading in 277 others with 41.8 per cent vote share whereas the Samajwadi Party has not won any seat so far but is leading in 115 seats with 31.8 per cent vote share. Uttar Pradesh Election Results 2022: Yogi Adityanath Scripts History, Becomes First UP CM to Return for Second Term After Completing One Full Term.

The Rashtriya Lok Dal is leading only in seven seats with 3.14 per cent votes whereas the BSP has won one seat and was leading in five others with 12.9 per cent votes.

(The above story first appeared on LatestLY on Mar 10, 2022 07:32 PM IST. For more news and updates on politics, world, sports, entertainment and lifestyle, log on to our website latestly.com).