The counting of votes for the Gandhinagar Municipal Corporation (GMC) elections has begun at 9 am on Tuesday. The results will be declared by evening. The fight was a three-cornered one with the Aam Aadmi Party (AAP) putting in a concerted effort apart from traditional rivals BJP and Congress. 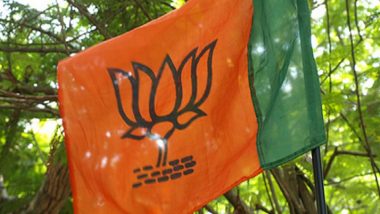 Gandhinagar, October 5: The Bharatiya Janata Party  (BJP) on Tuesday registered a landslide victory in the Gandhinagar Municipal Corporation (GMC) elections 2021. The BJP won 41 seats out of 44.  The COngress managed o win only two seats, while, the Aam Aadmi Party (AAP) bagged only one seat. The counting of votes for the GMC elections 2021 began at 9 am on Tuesday.

Before the election, politicial analyst believed that the contest would be a three-cornered one AAP putting in a concerted effort apart from traditional rivals BJP and Congress. Over 56 percent voter turnout was recorded in the GMC elections 2021. There are a total of 44 seats across 11 wards. The Congress and the BJP fielded their candidates on all the seats.

A total of 161 candidates were in the fray.  Notably, the Gandhinagar Municipal Corporation elections were held after the ruling BJP removed Vijay Rupani from the chief minister's post, and Bhupendra Patel took charge as the new CM of the state. Gandhinagar Municipal Corporation Election Results 2021 Live Streaming: Watch Live Updates of Counting of Votes of GMC Polls on TV9 Gujarati.

These elections could be seen as a litmus test for the party's abrupt and surprising decision to change the entire government, as it had registered a thumping win in the local bodies polls held in February. The BJP, with Rupani as CM, had swept six municipal corporations, municipalities and a majority of district and taluka panchayats.

In the previous GMC elections, the Congress and the BJP had won 16 seats each. However, Congress councillor Pravin Patel and one of his associates defected to the BJP, allowing the saffron party to form the body in GMC.

(The above story first appeared on LatestLY on Oct 05, 2021 10:45 AM IST. For more news and updates on politics, world, sports, entertainment and lifestyle, log on to our website latestly.com).