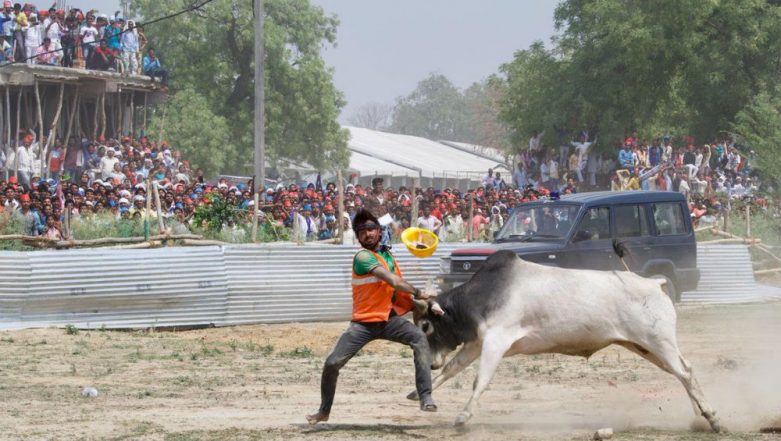 Lucknow, April 25: A bull entered the helipad area of BSP chief Mayawati and it took some chasing to get the bull off the area. The incident took place in Kannauj, at the political rally of Dimple Yadav, the wife of Samajwadi Party chief Akhilesh Yadav. Dimple is an MP from Kannauj Lok Sabha Seat and is contesting from the seat again. Akhilesh Yadav Calls BJP 'Bhagti Janata Party', Says 'Congress Betrayed Samajwadi Party'.

Former UP CM Akhilesh Yadav took a dig at the BJP government in Uttar Pradesh after the incident. Akhilesh said that the Samajwadi Party built expressway in short time but in two years of BJP rule in UP, people are disturbed by stray cattle. "We built the expressway in 21 months, but in the last 2 years people have been disturbed by 5 crore stray cattle," said Akhilesh in his tweet.

"If the government is not able to prevent the bull from entering the political programmes, it will only know what is happening to the poor farmers," added an angry Akhilesh.

Akhilesh Yadav's tweet can be seen in the context that farmers in Uttar Pradesh have been complaining about the issue of stray cattle ever since the BJP imposed a ban on many slaughterhouses across the state as soon as it came to power in the 2017 UP assembly elections.

BSP chief Mayawati was seen with Akhilesh Yadav and Dimple Yadav at the Kannauj rally on Thursday. This was the first time that Dimple Yadav and Akhilesh Yadav were seen sharing a stage. The Samajwadi Party and Bahujan Samaj Party, once bitter rivals, stitched a pre-poll alliance before the 2019 Lok Sabha Elections 2019.