Ahead of the assembly elections in Kerala, the Congress party is facing a political crisis after four of its leaders resigned in a week. 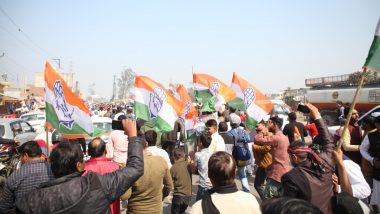 Kochi, March 4: Ahead of the assembly elections in Kerala, the Congress party is facing a political crisis after four of its leaders resigned in a week. The four resignations came from Wayanad, the parliamentary constituency of former Congress chief Rahul Gandhi. Consequently, the Congress has directed senior leaders such as K Sudhakaran to intervene and resolve the crisis. Kerala: Congress-Led UDF Releases Campaign Slogan for Assembly Polls.

"Due to neglect by the KPCC leadership and the failure of District Congress Committee, I'm resigning as the KPCC secretary post and primary membership from the party," Vishwanathan said. He also alleged that the party was being run by a three-member team in Wayanad. Meanwhile, PK Anil Kumar has joined joined Lok Tantrik Janata Dal (LJD).

In order to resolve the crisis ahead of the assembly polls, Congress leader K Sudhakaran today visited the DCC office in Wayanad and spoke to leaders there. Kerala will go to polls in a single phase on April 6. In the 140 Kerala assembly, this time the Congress is expecting to contest in around 95 seats, leaving the rest to its allies. The results will be declared on May 2.

(The above story first appeared on LatestLY on Mar 04, 2021 12:37 PM IST. For more news and updates on politics, world, sports, entertainment and lifestyle, log on to our website latestly.com).