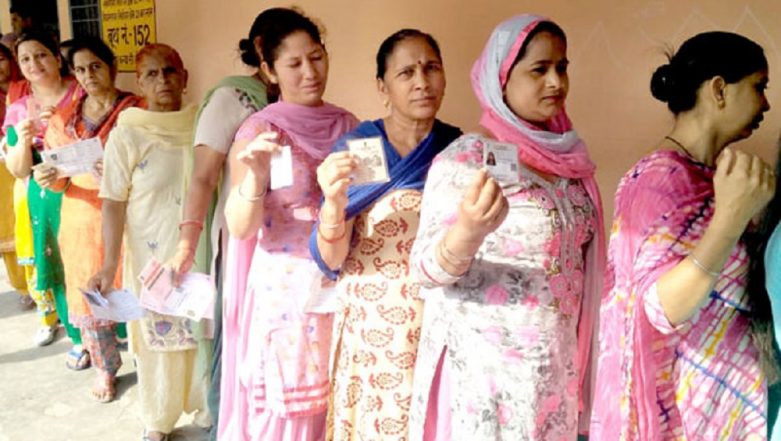 Chandigarh, May 12: Haryana recorded 51.48 per cent polling till 3 pm on 10 Lok Sabha seats, which are undergoing polls on Sunday, the sixth phase of seven-phased parliamentary elections. All the 10 seats which are undergoing polls in the state are - Ambala (reserved for scheduled caste), Kurukshetra, Karnal, Sonipat, Hisar, Sirsa, Bhiwani-Mahendragarh, Rohtak, Gurgaon, and Faridabad.A total of 223 candidates are in the fray here for these ten Lok Sabha seats.

The seventh and last phase of elections will take place on May 19. The counting of votes will take place on May 23. The state is witnessing multi-cornered contest on most of the seats. The first time player in the Lok Sabha election - Raj Kumar Saini led Loktantra Suraksha Party (LSP) in alliance with the BSP and Ajay Chautala led Jannayak Janata Party (JJP) - has added a new dimension to the ballot of ballots in the state. Who Will Win Chhattisgarh, Punjab, Delhi And Haryana Lok Sabha Elections 2019? Here's What Opinion Poll Predicts; Watch Video.

He said that as per the directions of ECI, the Returning Officer would visit the strong room thrice. The videography would be carried out of the entire process of keeping the EVMs and VVPAT machines in the strong room and sealing the room.

He said that log book would be kept for maintaining the record of incoming and outgoing people from the strong room. The log book would be maintained by the Returning Officer or District Electoral Officer, he added. He said that as per the directions of the ECI, the strong room can be opened only in case of emergencies such as outbreak of fire, flood or earthquake, but it would be necessary to inform the ECI and take prior approval.

"In case of emergency, the EVMs and VVPAT machines would be shifted from strong room to some other place in the presence of Returning Officer, District Electoral Officer, candidates or their election agents and CAPF. Videography would be carried out of this entire process," he added.