Mewa Lal Choudhary, newly sworn-in education minister of Bihar, is facing flak after the Rashtriya Janata Dal (RJD) shared a video of him wrongly reciting the national anthem on Twitter. 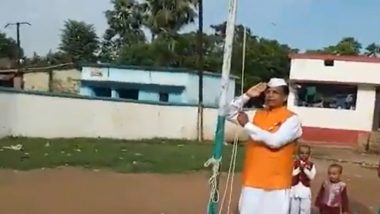 The video appears to be of an event at a school. Sharing Choudhary's video, the RJD tweeted: "Bihar Education Minister Mewa Lal Chaudhary, accused in several corruption cases, does not even know the national anthem. Nitish Kumar Ji, is there any shame left? Where did you sink your conscience?" Netizens also slammed Choudhary, an MLA of the Janata Dal (United) from Tarapur, for reciting the national anthem incorrectly. Nitish Kumar Has No Option but to Comply With BJP, Says RJD Leader Manoj Jha.

With assets worth Rs 12.31 crore, Mewa Lal Choudhary is the wealthiest minister in Nitish Kumar's cabinet. He had lost the cabinet birth previously after his name cropped up in an alleged scam in the recruitment of lecturers in an agriculture university.

(The above story first appeared on LatestLY on Nov 18, 2020 06:46 PM IST. For more news and updates on politics, world, sports, entertainment and lifestyle, log on to our website latestly.com).