'My Daughter Did Something You Won’t Like': Chief Guest Shiv Nadar Narrates Shocking Incident at RSS Headquarters

Addressing top RSS functionaries and workers at the headquarters of the right-wing outfit, Shiv Nadar said that his daughter has done something that many people won't like. 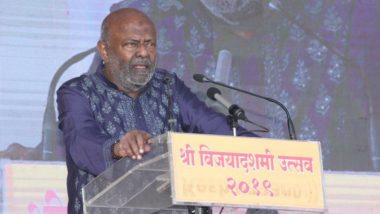 Nagpur, October 8: HCL founder Shiv Nadar was invited as chief guest at this year's Vijaya Dashami event of the Rashtriya Swayamsevak Sangh (RSS) in Nagpur. Addressing top RSS functionaries and workers at the headquarters of the right-wing outfit, Shiv Nadar said that his daughter has done something that many people won't like. Nadar said that his daughter forced malnourished children in Uttar Pradesh to eat chicken for their protein intake. On Vijayadashami 2019, Mohan Bhagwat Hails Modi Government For Taking Bold Decisions, Says 'RSS Members Not Involved in Mob Lynchings'.

In his address, Nadar first highlighted startling statics about the health conditions of children in Uttar Pradesh discovered by his initiative Shiksha. He said that his foundation found that 46 percent of children in Uttar Pradesh under the age of five suffer from stunting as a result of extreme malnutrition. He then narrated an incident about his daughter and said that she did something that people in the audience wouldn't like. Dussehra 2019 Greetings: PM Narendra Modi Wishes Happy Vijayadashami to Nation, Shares Video With a Message.

"My daughter is involved in this project (Shiksha). She did something that you won't like. She forced them (children in schools) to eat chicken for their protein intake. Children in western parts of Uttar Pradesh are generally short. There is need for better nutrition. People in those parts generally don't eat rice. They have rotis. However, you can only have it when it is fresh out of the fire. You can't store it and have it cold," he told the gathering.

Nadar pointed out that his organisation found out that the average income in an agriculture household is just Rs 6,400 per month. "With a family size of five, that is less than Rs 1,300 per individual per month. Also, livelihood opportunities in rural India beyond agriculture are far and few," he said. Speaking of Dussehra, the HCL founder said it is a constant struggle to defeat the "evil within and outside".

(The above story first appeared on LatestLY on Oct 08, 2019 12:02 PM IST. For more news and updates on politics, world, sports, entertainment and lifestyle, log on to our website latestly.com).