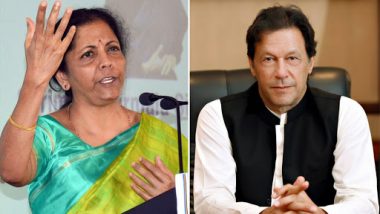 Bengaluru, February 19: Hours after Pakistan Prime Minister Imran Khan claimed that they would take ‘action’ if 'actionable intelligence' is provided by India on the Pulwama terror attack which killed 40 CRPF personnel, Union Defence Minister Nirmala Sitharaman questioned the Pakistan Premier on the actions that were taken by them on the previous dossiers and evidences sent after the 26/11 Mumbai terror attacks.

Addressing a press conference in Bengaluru on Tuesday, Sitharaman questioned on Imran Khan and his promise of taking ‘action’ on Pulwama perpetrators. She asked, “Since the Mumbai attack not just this government, but earlier government too sent dossiers after dossiers and evidence. What action has Pakistan taken on them?” Pulwama Terror Attack: Imran Khan Asking For Proof to Probe Pakistan's Role is Lame Excuse, Says MEA.

She further added, “In India, following due process of law, courts have been approached and Mumbai attackers have been given due process and been punished too. In Pakistan, not even the first court is doing its job. There is nothing for Pakistan to show.”

Sitharaman reiterated PM Narendra Modi’s words on full freedom given to armed forces. She said. “Prime Minister has already said that forces have been given freedom to respond at any given time and as they see fit.”

The Union Defence Minister assured that appropriate measure are being taken. She said, “I wouldn't want to get into details of how the government will respond to this because at this moment. No words will assuage the disappointment faced by every citizen of this country.”  Imran Khan Reacts to Pulwama Terror Attack, Says 'If India Opens War Front, Pakistan Will Retaliate'.

Adding more, she said that the investigative agencies are probing the matter and gathering the details, of which she wouldn’t like to speak on at this juncture. However, she assured that every effort would be taken to prevent any future incident like Pulawama. The Minister said, “Every effort will be taken to prevent any future incident such as Pulwama terror attack. We are gathering more information from the ground.”

Earlier in the day, Pakistan Prime Minister Imran Khan, while replying on the Pulwana terror attack, had stated that there is no involvement of Pakistan in it and his government condemns the attack. He broke his silence and promised 'action' if 'actionable intelligence' is provided by India. Pakistan Writes to UN Chief: Denies Role in Pulwama Attack, Says India Threatening Us With Force.

In a televised address, he claimed that there was 'no evidence' about Pakistan link and that India was being 'judge, jury and executioner'. He said, “I want to tell India, we are ready for any kind of investigation. If there is any actionable intelligence, give it to us, I guarantee that we will take action."

All this took place after a terror group – JeM – declared their responsibility behind the heinous attack. The JeM

in their claim stated that a 19-year-old school dropout, who joined the outfit last year, was the bomber who targeted a convoy of the Central Reserve Police Force (CRPF) on February 14, killing 40 soldiers.

(The above story first appeared on LatestLY on Feb 19, 2019 08:00 PM IST. For more news and updates on politics, world, sports, entertainment and lifestyle, log on to our website latestly.com).