Telangana Assembly Elections May Not be Held Along With Four Other States Scheduled For Year-End Polls: EC Sources 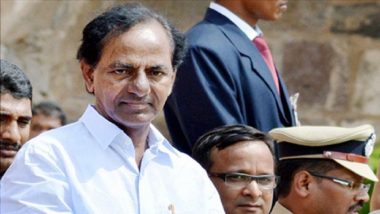 New Delhi, Sept 7: The assembly elections in Telangana may not be clubbed together with four other states - Rajasthan, Madhya Pradesh, Chhattisgarh and Mizoram - which are scheduled for year-end polls.

According to top Election Commission sources cited by news agency ANI, the polls in Telangana may not be conducted simultaneously along with the four above-mentioned states.

There is a possibility that the EC defers the polls till the onset of next year, as the state was scheduled to publish its revised electoral rolls in January 2019, reports said on Friday.

Elections in Telangana might not necessarily be held along with other four states: Sources to ANI pic.twitter.com/kUzaIU3vhw

Rao submitted his resignation to Governor ESL Narasimhan, who asked him to continue as the acting CM till the new assembly is constituted.

Notably, the Telangana Rashtra Samithi (TRS) of Rao had won a landslide victory in 2014 -- when the first polls were held in the state after its bifurcation from Andhra Pradesh.

The TRS, which has 82 MLAs in the 120-member assembly, is expected to further consolidate its electoral grounds in the next elections. The state's prime opposition, Congress, along with the TDP and the BJP are ill-prepared to go into early polls, pollsters opine.

BJP state unit chief K Laxman accused Rao of calling early elections fearing that the "TRS would be wiped away in the Modi wave of 2019".

(The above story first appeared on LatestLY on Sep 07, 2018 01:19 PM IST. For more news and updates on politics, world, sports, entertainment and lifestyle, log on to our website latestly.com).