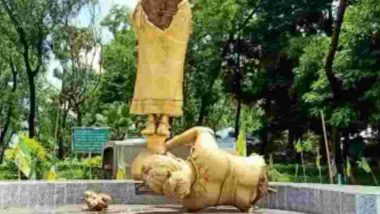 Agartala, August 3: The Tripura Police on Monday charged CPI(M) leader and former lawmaker Jitendra Chaudhury and two others with criminal conspiracy, rumour-mongering and spreading communal disharmony. They were charged after Bharatiya Janata Party (BJP) secretary Mihir Sarkar complained Chaudhury and others over a social media post, in which CPIM leaders alleged that BJP supporters broke a statue of an indigenous woman.

According to a report, published by the Hindustan Times, a 17-feet long statue was found broken in Khumulwng on Saturday morning. Khumulwng is the headquarters of the Tripura Tribal Areas Autonomous District Council (TTAADC). Though CPIM leaders allege BJP supporters for breaking the statue, Mihir Sarkar claimed that the statue fell because of heavy rainfall and storm. Tripura: Man Accused of Raping 65-Year-Old Neighbour Allegedly Dies by Suicide in West District.

Complaining about the CPIM leaders, Mihir Sarkar said, "....with an ill and perverse motive and malafide intention, one of the political parties of the state, Communist Party of India (Marxist) had tried to fraudulently distort the facts and has tried to put the blame upon BJP and RSS as is clear from Facebook posts of CPIM Paschim Tripura Zilla."

Adding more, Sarkar wrote in his complaint, "We see it as a criminal effort to spread communal disharmony among the different communities of the state and as it appears a deep conspiracy has been hatched by the CPI ( M) to promote and spread communal violence in the state." West Agartala Police have registered the FIR against former MP Jitendra Chaudhury under Section 120(b), 153(a), 505 (2) of the Indian Penal Code and currently investigating the matter.

(The above story first appeared on LatestLY on Aug 03, 2020 03:16 PM IST. For more news and updates on politics, world, sports, entertainment and lifestyle, log on to our website latestly.com).