The incident took place in Court 2 and is located to a new building in Ashok Bagh. 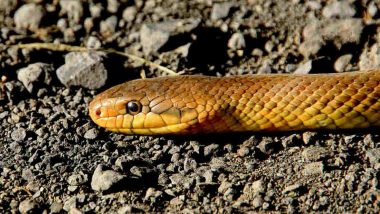 Navi Mumbai, September 5: A judge in Panvel court was bitten by a rate snake at 11:30 am on Tuesday inside the Court chamber. According to a Times of India report, the judge was in the Old court in Bandar Road. The rat snake bit judicial magistrate first class (JMFC) on his right hand, he was later taken to Panvel sub-divisional hospital but was later moved to Gandhi Hospital, Old Panvel. Rat Fighting Off a Snake In This Video is Shocking Yet Filled With Amazing Life Lessons

A snake-catcher was summoned and the reptile was caught and released in its natural habitat. Panvel sub-divisional hospital medical superintendent Dr Nagnath Yempale as quoted in the report said."

The judge had come for treatment but left for some other hospital. The incident took place in Court 2 and is located to a new building in Ashok Bagh.

(The above story first appeared on LatestLY on Sep 05, 2018 01:17 PM IST. For more news and updates on politics, world, sports, entertainment and lifestyle, log on to our website latestly.com).