Krishna Roy, wife of Trinamool Congress leader Mukul Roy, passed away at a private hospital in Chennai on Tuesday. Krishna Roy died of cardiac arrest at 4.35 a.m. on Tuesday. Her body will be brought back to Kolkata on Wednesday. 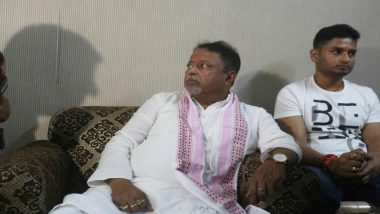 Krishna Roy died of cardiac arrest at 4.35 a.m. on Tuesday. Her body will be brought back to Kolkata on Wednesday.  Father Stan Swamy Dies: Kerala CM Pinarayi Vijayan Expresses Condolences Over The Demise of Octogenarian Tribal Activist

Chief Minister Mamata Banerjee in her condolence message said, "I express my deep anguish at the death of Krishna Roy. She was involved in many social work. I express my heartfelt sorrow for Mukul Roy, his son Subhrangshu Roy and all the family members".

Krishna Roy was suffering for a long time and was initially admitted to a private hospital in Kolkata. Recently, she was flown to Chennai in an air-ambulance for kidney transplant.

One of the founding members of the Trinamool Congress, Mukul Roy returned to his old party recently after being in the BJP for four years. Mukul Roy had won from the Krishnanagar Uttar Assembly constituency on a BJP ticket in this year's West Bengal polls.

(The above story first appeared on LatestLY on Jul 06, 2021 12:48 PM IST. For more news and updates on politics, world, sports, entertainment and lifestyle, log on to our website latestly.com).