Why Pakistan Celebrates Independence Day on August 14, A Day Before India? Here Is The Reason 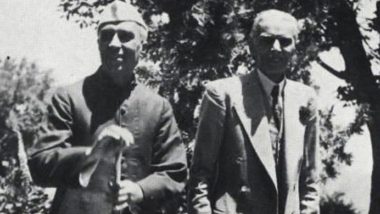 The British used its tactics and followed a divide and rule policy to establish their dominance in India for almost 200 years. While leaving the country in 1947, they divided it into two parts - India and Pakistan. Interestingly, Pakistan celebrates its Independence Day on August 14, a day before the Independence Day of India in spite of the fact that both the nations were formed on the same day.

Several historians have come up with different theories to explain why Pakistan celebrates its Independence Day on August 14th. The British Viceroy Lord Mountbatten had chosen August 15th to commemorate the surrender of Japan to the Allied Powers which marked the end of World War II. Mountbatten played a significant role in deciding the date of Pakistan’s Freedom day. Pakistan's News Channel Dawn Hacked, Indian Flag With Happy Independence Day Message Surfaces on Screen (Watch Video).

Secondly, August 14, 1947 was the 27th day of Ramadan, which is considered an auspicious day during the last ten days of the holy month of Ramzan. According to one theory, being an Islamic country, Pakistanis unanimously declared August 14 as their day of emancipation.  Independence Day 2020 Speech Videos: Powerful Speeches by Great Leaders That Echo India’s Freedom Struggle.

Even the founder of Pakistan Mohammed Ali Jinnah mentioned August 15th as Pakistan’s Independence Day. Jinnah in his radio speech said, "August 15 is the birthday of the independent and sovereign state of Pakistan. It marks the fulfilment of the destiny of the Muslim nation which made great sacrifices in the past few years to attain its homeland.” Pakistan’s first commemorative postage stamps mentioned August 15th as its Independence Day. These stamps were released in July 1948.

Some people even propose the bizarre logic that Pakistan is 30 minutes behind India, so when the 'Indian Independence Act' was signed in New Delhi on 15th August 1947 at 0000 Hrs, It was 11:30 pm of August 14 in Islamabad. Notably, India is 0530 hours ahead of GMT.

(The above story first appeared on LatestLY on Aug 14, 2020 08:00 AM IST. For more news and updates on politics, world, sports, entertainment and lifestyle, log on to our website latestly.com).