From the Devil Wears Prada to Sex and the City 1 & 2, These Movies Are for True-Blue Fashion Lovers

So there you go, fashion lovers, a movie list just for you. Fashion and movies together, get the best of both worlds for your next movie night! 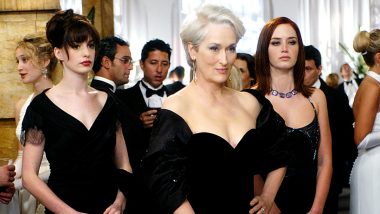 Well, what can we say? We love movies! There isn't a single person you can turn to who hates movies (not entirely true, some people do hate movies, but their reasons are almost always personal and specific), and why would there be? Movies provide an escape to an alternative world where anything is possible. Also, most romantic comedies are somehow based in New York City, and no sane person misses a chance to appreciate that magnificent urban fantasy, even in the form of digital media (NYC is gorgeous, we won't apologise for that random shout-out). Y2K Fashion Is Back! 11 Trends From the Year 2000 That Has Made A Big Return.

Why all this appreciation for movies, you ask? Let us be the first to let you know, the author of this article is a self-proclaimed cinephile. And if you're a fashion junkie too like us, we can guarantee you are going to love this article. We are going to give you the scoop on movies you should watch (or even binge-watch, it will be difficult not to) if you are a fashion lover. Be it fiction, documentaries, or a pretty slice of romantic comedies, these movies ensure that the fashion is on point. Keep scrolling for more!

Normally, just having Meryl Streep in a movie gives it Oscar status (pun attended). But combine it with a script that is literally strictly fashion, and you've got a fashion lover's cult classic go-to. Ms. Streep plays Miranda Priestly, and even a blind fashion buff will draw a direct comparison to Vogue Chief Anna Wintour. The best part? You'll get a somewhat accurate look at the life of a fashion intern.

Romantic comedy lovers, this one is for you. The protagonist Rebecca Bloomwood (played by Isla Fisher), struggles with her shopping addiction. And while we are pretty sure you aren't a shopping addict, we can also guarantee that you'll enjoy Rebecca's closet and her impeccable dressing sense. Every accessory and the overall outfit is well thought out to convey the character's time-perfected fashion taste. Add some romance, and you've get a home run.

If you are a fashion lover, you've probably heard of (and even adore) Vogue's renowned editor Anna Wintour. She has become a global symbol of excellence in the fashion industry, and this documentary gives you the first-ever behind-the-scenes glimpse into what it takes to iron out every revered issue of Vogue (particularly the 2007 September issue, often touted as the most important issue of a magazine).

Asians are incredibly fashionable and unfortunately not recognized enough. Enter Crazy Rich Asians (2018), and you get a look at the every day and even couture looks of wealthy Asians. The real star to look out for is Peik Lin Goh (played by Awkwafina), the protagonist's former college roommate who literally has a number of outfits for different occasions stuffed in her car trunk. If that isn't fashion-forward dedication, we don't know what is.

Late street style photography legend Bill Cunningham was only known amongst fashion insiders until this incredible biography. With his signature blue jacket and bicycle, he became a fashion legend due to his incredible fashion-based photography featured exclusively in The New York Times. You get a rare look into the life of the eccentric photographer, and his iconic quotes about fashion ("it's the armour to survive the reality of day-to-day life) only better describe his eccentric nature.

Yes, we know it's a spy-thriller, but it's also a fashion-forward one! Lorraine (played by Charlize Theron) of the M16 is clad in Burberry trenches, vintage Dior and even Stuart Weitzman boots as she rushes to Berlin just before the wall collapses to get ahold of a list of the best secret agents. Spy thriller action paired with impeccable fashion, can it get any better?

We just couldn't choose one when both movies are literally dripping with fabulous fashion. The much-anticipated movies were released after the iconic show ended. And while the scripts of both films were mediocre at best, Carrie Bradshaw (played by Sarah Jessica Parker) and her group of gals are just as fashion-forward in the movies as they were in the show (if not more). Carrie's Manolo Blahniks and the rest of her coveted shoe collection make an appearance too.

So there you go, fashion lovers, a movie list just for you. Fashion and movies together, get the best of both worlds for your next movie night!

(The above story first appeared on LatestLY on Jul 26, 2021 05:06 PM IST. For more news and updates on politics, world, sports, entertainment and lifestyle, log on to our website latestly.com).