Kylie Jenner's Playboy cover is out and her face is not doing the talking here. It's screaming hotness with a picture of her bosom and Playboy necklace - a concept that we never saw coming. Well, hats-off to Travis Scott for conceptualising this entire shoot and encouraging her to come on board with this. 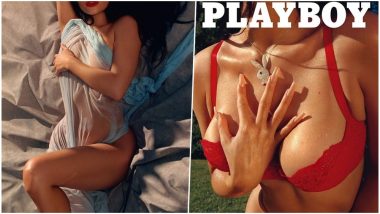 That's insanely hot! These were the exact words that came to our minds when we checked out Kylie Jenner's new magazine cover for Playboy. Yes, there's Kylie but hey, her face is missing from the cover and it's an incredibly bold move. Now Playboy as a magazine is known for presenting girls and women in their best sexual element but with Kylie, they have definitely taken our expectations a notch higher. The cover is BOLD and something that we didn't see coming.

Interestingly Kylie's beau, Travis Scott was creatively involved in this shoot and that explains their tagline - Kylie Jenner by Travis Scott. The magazine wanted the world to see this beauty mogul from the eyes of her man and clearly, his vision restricts him to her body parts. While we appreciate his views and hats-off to the publication for printing an edition without having a real face on its cover but hey, Kylie overall has a sexy body, something that all men will agree on. But then again, who are we to judge?

And some inside pictures

“I never thought I would pose for Playboy.” @kyliejenner by @travisscott See more at playboy.com #ThePleasureIssue Photographed by @sashasamsonova

Kylie earlier made headlines when she posted a nude picture with Travis Scott. Their scorching chemistry was definitely the highlight of it and we still can't stop raving about it. Overall, her recent bunch of pictures are smokin' hot and that's something that we predicted.

(The above story first appeared on LatestLY on Sep 13, 2019 10:09 PM IST. For more news and updates on politics, world, sports, entertainment and lifestyle, log on to our website latestly.com).