They are starring in two movies together - Namaste England, the sequel of 2007 blockbuster Namastey London and Dibakar Banerjee’s Sandeep Aur Pinky Faraar. 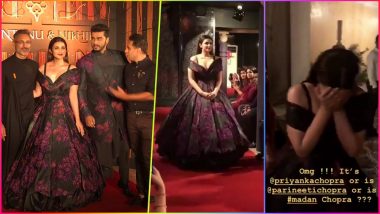 Parineeti Chopra and Arjun Kapoor are not just great co-stars but also crazy best friends. They made their Bollywood debut as protagonists with Ishaqzaade in 2012 and have been BFFs ever since. Recently, the cute pair teamed up to walk the ramp for acclaimed fashion designers Shantanu & Nikhil and did a fantastic job as showstoppers. Parineeti who has become one of the most fashionable stars in the industry looked ravishing in a black-purple floral gown as Arjun looked handsome as always in asymmetrical bandhgala. However, more than their dazzling show on the ramp, it was their backstage camaraderie that stole our hearts, and it involves Priyanka Chopra!

Parineeti is younger cousin of Priyanka, the global star who’s a cynosure of everyone’s attention. From signing movies to spotting in public, every single move of PeeCee makes international headlines. Now, Arjun who is a good friend of both the Chopra sisters, in fact, acted with both had a fun time teasing Pari about the same. A backstage video shared by several Insta pages shows Arjun acting like a paparazzi. He is heard shouting, ‘Oh my god, Oh my god, Priyanka Chopra’ while following Parineeti! Poor girl turns around, sheepishly smiles and hides her face. These two are just so adorable.

Coming back to the main fashion event, it was Shantanu-Nikhil's Autumn-Winter 2018 showcase titled "Independence" for which Arjun and Parineeti turned into stylish showstoppers. Parineeti was wearing a voluminous floor-length floral print gown in black and dark violet. It was a cold-shoulder with a deep plunging neckline. The middle part jet black hairstyle and just the right evening makeup turned Pari into a modern-day princess.

Speaking about having Parineeti and Arjun as the showstoppers for showcasing the new collection, Shantanu in an email interview was quoted saying by IANS: "As a brand, Shantanu & Nikhil is based on Indian values and believes firmly in egalitarian affirmations. Both Arjun and Parineeti have established themselves very well as Indian cinema ambassadors. Moreover, Arjun is not only a dear friend but has also represented the true virtues of being the Shantanu & Nikhil Man through his chivalrous, disciplined and ultra-dynamic demeanour."

Meanwhile, Nikhil threw some light on the changing couture landscape in India. He said, "Couture is no longer limited to following trends but rather creating them. For Shantanu and Nikhil couture is more about story telling as everyone now wants to buy that piece of a compelling narrative."

As for Arjun and Parineeti, their fans are going to see a lot more of them together. They are starring in two movies together - Namaste England, the sequel of 2007 blockbuster Namastey London and Dibakar Banerjee’s Sandeep Aur Pinky Faraar.

(The above story first appeared on LatestLY on Jul 22, 2018 12:43 AM IST. For more news and updates on politics, world, sports, entertainment and lifestyle, log on to our website latestly.com).