What Is Gender-Bending Fashion? Everything To Know About It

So there you go folks, an article covering all major aspects of gender-bending fashion. May it encourage you to experiment with your wardrobe and express your true authentic style. We can only wish. 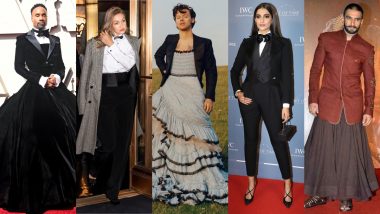 It isn't scandalous or newsworthy when a woman chooses to wear a suit anymore. Similarly, a man wearing nail polish isn't a big deal either. But really, why are they wearing clothing and donning accessories typically associated with the opposite gender? Well, welcome to the magnificent world of Gender-bending fashion. But what really is gender-bending? We are here to explain.

When a child is born, they are assigned a gender based on their biological sex and the parents already make some seemingly unconscious, presumptuous decisions based on it: blue clothes for boys and pink clothes for girls. It doesn't stop there. Boys need to have short hair. They need to wear shirts and t-shirts and trousers. Girls are put in dresses and skirts and their hair just has to be long and often in pigtails. Even gender reveal parties (which were originally 'cool', but are now recognized as extremely stupid owing to the California wildfires they caused) are a concept that celebrates the orthodox and ancient ritual of assigning gender at birth. But what drives these decisions? Why are we assigning gender at birth? Well, the simple answer is because that is what's been done since ancient times. Instagram Influencer Mark Bryan Wears Heels and Pencil Skirts to Work Because ‘He Can’, His Gender-Bending Fashion Is a Hit on Social Media (View Pics).

But times have changed. Gender is recognized for its fluidity now. And with that, we come to gender-bending fashion: clothing that goes against the orthodox, traditional custom of men and women wearing clothing that is deemed to be 'masculine' or 'feminine' respectively. When it comes to gender-bending fashion, you are allowed to wear whatever you want. Boys can choose to wear skirts, dresses, or even slap on some nail polish. Girl can choose to wear loose t-shirts and trousers, or even a tuxedo. There are no rules. Fashion is revealed in its purest form: wearing clothing that defines you without any restrictions.

Gender-bending fashion made its public debut a couple of decades ago, and celebrities are not novices to the phenomenon by any means. David Bowie and Prince literally paved the way for future generations back in the 70s with their unapologetic and bold gender-bending fashion choices. Perhaps one of the most iconic moments in pop culture history was when Prince stepped on the stage of the 1985 Academy Awards to accept his Oscar for Purple Rain drapped in a shimmery purple shawl atop his black pantsuit, hid hands enclosed with lace gloves and a pair of high heels. This one single moment can be used to describe gender-bending fashion history.

In modern times, we have Harry Styles. Gen Z has already crowned him as their unofficial king, and his gender-bending wardrobe is revered among fans worldwide. Not to mention his nails. They are literally always covered with different colours. Oh, to be his manicurist. That is the dream.

So there you go folks, an article covering all major aspects of gender-bending fashion. May it encourage you to experiment with your wardrobe and express your true authentic style. We can only wish.

(The above story first appeared on LatestLY on Jul 26, 2021 02:23 PM IST. For more news and updates on politics, world, sports, entertainment and lifestyle, log on to our website latestly.com).