All Saints' Day 2019: History, Facts, Traditions And Practices Related to All Hallows' Day

All Saints' Day or All Hallows' Day is celebrated every year on November 1 by the Roman Catholic Church and some Protestant denominations. 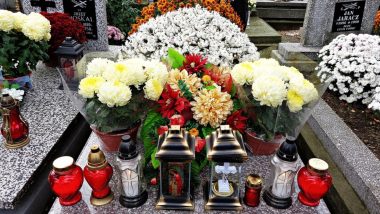 All Saints' Day or All Hallows' Day is celebrated every year on November 1 by the Roman Catholic Church and some Protestant denominations. Also known Hallowmas, the Feast of All Saints, or Solemnity of All Saints, the day is dedicated to remembering the dead. It is observed on the first Sunday after Pentecost in Eastern Orthodox churches. The earliest observance of the holiday was recorded during the early fourth-century. It became a prominent observance under Pope Boniface IV. Pope Gregory III made All Saints' a holy day in the mid-eighth century and moved it to November 1.

On All Saints' Catholics are expected to attend Mass. The holiday is observed with a reading of the Beatitudes, eight blessings recounted in Jesus' Sermon on the Mount in the Gospel of Matthew. The day is also observed by offering flowers to dead relatives. Others light candles in remembrance of the dead and visit graves of their loved one.

All Saints Day celebration was modified to include literally all saints in the ninth century. It became a church-wide observance of the Feast of All Saints on November 1. The Western Church brought in a Christian focus into the ancient festival of the dead with the change in date that many Europeans celebrated during the first part of November. The Church began observing a vigil the night before All Saints Day which coincided with the beginning of the festival to honour the dead. Also known as All Hallows Eve or Halloween, the observance has many old European customs and traditions attached to it.

All Saints Day Traditions And Practices

According to the Catholic traditions, prayers are offered to the Virgin Mary and all the saints. Lutherans and Episcopalians remember the day by giving thanks to God for all saints, living and dead. While, the Orthodox Churches honour all Christian martyrs on the first Sunday after Pentecost. Special food offerings, drinks and display of flowers are kept for the dead. In Eastern Europe, All Saints Day is a public holiday. where people remember deceased family members, friends and national figures.

All Saints' Day comes just after the pagan holiday of Samhain and falls around Halloween. It also overlaps with the Mexican cultural celebration, Dia de los Muertos, or Day of the Dead, and is directly followed by another Catholic holiday, All Souls' Day.

(The above story first appeared on LatestLY on Nov 01, 2019 08:35 AM IST. For more news and updates on politics, world, sports, entertainment and lifestyle, log on to our website latestly.com).