Chaitra Navratri 2022 Puja Vidhi: From Maa Shailputri to Devi Siddhidatri, What are The Nine Forms of Goddess Durga? Significance, Rituals, Bhog and Mantras, Here's How to Seek Blessings From Nav Durga

Happy Chaitra Navratri 2022! The time has come to worship the nine grand forms of Maa Durga to seek her blessing for a happy and prosperous life. There are special ways to celebrate each day of Navratri that is dedicated to each of the nine forms of Maa Durga. 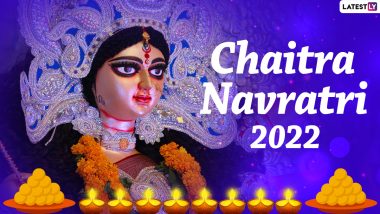 Adi Shakti was born in this form in the house of Shailputra Himalaya, that is why she was named Shailputri. Shailputri rides on a bull named Nandi and holds a trident in her right hand along with a lotus flower in her left hand.

Maa Shailputri Worship Method: Establish a picture of Maa Shailputri and lay a red cloth on a wooden post below it. Place wish fulfillment gutika on it and after this meditate thinking of Shailputri Devi with a red flower in hand. And say the mantra - 'Om aim hreem clean chamunday viche om shailputri devai namah.'

Bhog: By offering cow's ghee at the feet of Maa Shailputri, devotees are said to be blessed with great health

To get Lord Shankar in the form of her husband, Aadi shakti had done severe penance. Due to this difficult penance, this goddess was named as Tapascharini i.e. Brahmacharini. She is considered the goddess of renunciation and penance. Maa Brahmacharini wears white clothes. In his right hand she holds the chanting of Ashtadal and in his left hand a kamandal is adorned.

Maa Brahmacharini Worship Method: First manifest all the deities, ganas and yoginis whom you have invited. Worship her with flowers, akshat, roli, sandalwood, bathe her with milk, curd, sugar, ghee, and honey and then offer a part of whatever prasad you can.

Bhog: This form of Maa Durga should be offered sugar and Panchamrit.

There is a crescent moon on the forehead of Maa Chandraghanta. Due to which she got this name, this form of Maa Durga is very peaceful. Worshiping her brings peace to the mind. It makes the devotees fearless.

Bhog: Offer milk and things made from it to Maa Chandraghanta and also donate the same.

It is said that the world gets illuminated by her light and radiance. The effulgence present in all the objects and beings of the universe is said to be because of her. Maa Kushmanda has eight arms. Hence she is also known as Ashtabhuja Devi as well.

Skandmata is said to have four arms. The lower arm on her right side, which is raised upwards, has a lotus flower. In the upper arm on the left side, she has taken lotus flowers in vermillion. She sits on the lotus seat and that is why she is also called Padmasana Devi.

Skandmata Worship Method: First of all, install the idol or picture of Skandamata on the outpost (Bajot). After this, purify it with Ganga water. Fill water in a silver, copper or earthen pot on the post and place an urn on it. Establish Shri Ganesha, Varuna, Navagraha, Shodash Matrika (16 goddesses), Sapt Ghrit Matrika (seven vermilion dot) on the same post.

Bhog: One should offer banana to Skandamata.

Katyayani is the sixth incarnation of Maa Durga among the nine goddesses. This form of Goddess is compassionate. According to Devi Purana, she is known as Katyayani because of her birth as the daughter of Katyayan Rishi. Maa Katyayani's body is golden and shiny.

Maa Katyayani Worship Method: On the sixth day of Durga Puja, first-day Kalash and Goddess Katyayani are worshipped. On starting the method of worship, the mantra of the goddess is meditated upon by bowing down to the goddess with flowers in her hands. After worshiping the Goddess, one should worship Mahadev. Shri Hari should be worshiped along with Goddess Lakshmi.

Bhog: On this day, honey should be used in prasad.

The seventh power of Goddess Durga is known as Kalratri. The color of the entire body of Maa Kalratri is like a darkness, hence the body remains black. The hair on his head is always open.

Maa Kalratri Worship Method:  On the day of Saptami puja, the seekers who do tantra worship worship the goddess in the middle of the night with tantric method and on this day the eyes of the mother open.

Her glory is equated with conch, moon and kunda flowers. All the clothes and ornaments of Mahagauri are white. She has four arms and she rides a Vrishabha (bull). The posture of the mother is very calm and she holds a damru, a trident in her hands and holds abhaya-mudra.

Maa Mahagauri Worship Method: To worship her, the devotee should take the idol or picture of Mahagauri and make her sit on a wooden post on the eighth day of Navratra. After doing Panchopchar, offering a wreath of flowers, desi ghee lamp and incense sticks.

Maa Siddhidatri is seated on a lotus flower and has four arms. The ride of mother Siddhidatri is a lion. The Goddess has assumed the form of Siddhidatri to shower compassion on the devotees. The deities, sages, asuras, snakes, human beings... all are said to be her devotees.

Worship method of mother: First of all light a lamp in front of Maa Siddhidatri. Now offer nine flowers of red color (It is better if there is a lotus flower). These flowers should be wrapped in a red cloth. After this, offer nine types of food items  and distribute prasad among the people around you. Also, provide food to the poor. 9 little girls are also worshipped on this day.

It is said that during Chaitra Navratri the gods pleased Mother Parvati and requested her to protect them. After this, Mata Rani manifested nine forms from her part, which the gods gave power by giving their weapons. This sequence started from Pratipada date in the month of Chaitra and lasted for 9 days, since then these nine days were celebrated as Chaitra Navratri.

(The above story first appeared on LatestLY on Apr 01, 2022 09:33 AM IST. For more news and updates on politics, world, sports, entertainment and lifestyle, log on to our website latestly.com).