Chhattisgarh Formation Day 2020: Know Date, Significance and History of the Formation of the 26th State of India 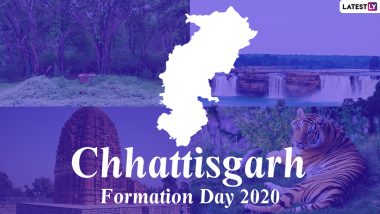 The Chhattisgarh Formation Day or Chhattisgarh Rajyotsava is celebrated every year on November 1. This year it falls on a Sunday. The day marks the establishment of Chhattisgarh as an independent state. The Government of India officially declared it as in independent state on November 1, 2000 and became the 26th state of the country. It was earlier a part of Madhya Pradesh. This year is the 20th year of its emergence as a separate state. All Saint's Day 2020 Date And Significance: Know The History And Events Related to the Christian Observance That Honours Saints And Martyrs.

During the ancient period Chhattisgarh was known as Dakshin Kosala and was re-named as Ratanpur during the Mughal era. It was during the Maratha reign in 1795 that the state adopted Chhattisgarh as its name. The word Chhattisgarh means 36 forts and derives its origin from the forts in the state. According to a popular legend, during the rule of Jarasandha around 36 Dalit families emigrated from his kingdom and walked down south to establish Chhatisghar - 36 houses - which eventually came to be known as Chhattisgarh.

Since then, November 1 is celebrated as the Chhattisgarh Formation day every year throughout the state with various progarmmes and events organised by the state government.

(The above story first appeared on LatestLY on Oct 31, 2020 05:49 PM IST. For more news and updates on politics, world, sports, entertainment and lifestyle, log on to our website latestly.com).