Halloween 2020 Date And Significance: Know The History, Traditions And Celebrations Related to the Spooky Observance

Halloween is celebrated on October 31 in countries around the world. It originated with the ancient Celtic festival of Samhain in which people would light bonfires and wear costumes to ward off ghosts. The festival thus evolved and various activities began to be observed including trick-or-treating and carving jack-o-lanterns with pumpkin. 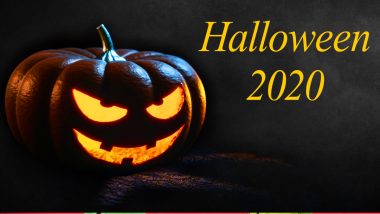 Halloween also known as All Hallows' Eve is celebrated on October 31 in countries around the world. It originated with the ancient Celtic festival of Samhain in which people would light bonfires and wear costumes to ward off ghosts.  As years passed by, in the 8th century Pope Gregory III designated November 1 as a time to honour all saints, which had some traditions of Samhain. The evening before was known as All Hallows Eve, which later came to be known as Halloween. The festival thus evolved and various activities began to be observed including trick-or-treating and carving jack-o-lanterns with pumpkin. It is celebrated as a festival by lighting pumpkin lanterns and fancy yet scary costumes. Trick or treating, carving jack-o-lanterns, festive gatherings, and eating treats are a part and parcel of the day. Halloween 2020 Funny Yet Scary GIFs and HD Images! Hilariously Frightening GIF Videos to Send Greetings on All Hallows' Eve.

The origin of Halloween is in the Celtic history which belong to the region in present-day Ireland, Northern France UK. The tradition got mingled with the Roman festival of Feralia that pays respects to the dead. It continued till the 8th century after which it got mingled with Christianity after being influenced by various traditions. Thus it became All-hallows finally termed as Halloween. In the 19th century, Halloween became an annually American festival celebrated during Autumn. Halloween 2020 Mehndi Designs: Quirky Spiderweb Henna Tattoo And Scary Pumpkin Mehendi Design HD Images to Apply on Your Palms (Watch Videos)

The significance also symbolises its shift from summer and then bring forth the winter season. Halloween has a number of different traditions associated with it that make the festival. Some of the famous traditions include “trick or treat” wherein children dress up as ghosts and go to houses asking for candies and sweets. From witches, werewolves, spiders, pumpkins, scary cartoon characters, pumpkin lanterns, ghost movie figures and a lot more. In western countries, people carve pumpkins and keep it on the front of their doors. Halloween Party 2020 Food Ideas: From Snacks, Cocktails to Desserts, Interesting Recipes to Add The Spooky Flavour on Your Menu (Watch Videos)

Halloween is celebrated differently in different countries. In Mexico, Latin America and Spain, it is celebrated as Dia des Los Muertes which translates to The Day of the Dead. People believe that on the night of Halloween the spirits of the dead return. They also create an altar to the dead with foods, flowers, candles and photographs to honour them

(The above story first appeared on LatestLY on Oct 26, 2020 05:42 PM IST. For more news and updates on politics, world, sports, entertainment and lifestyle, log on to our website latestly.com).