On October 2nd various events and functions are held in schools and colleges across the country paying tributes to the work of Gandhiji. And as Gandhi Jayanti 2019 is a day away, we have compiled a list of essay topics on which kids can elaborate in their school on Gandhi Jayanti. 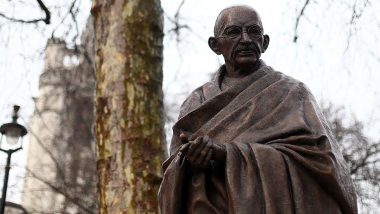 The birth anniversary of Mohandas Karamchand Gandhi is celebrated as Gandhi Jayanti on October 2 every year in India. This is one of three national festivals, the other two being - Independence Day (celebrated on August 15) and Republic Day (January 26).  Gandhi Jayanti 2019 celebrations are expected to be extra special as this year the country will be observing 150th birth anniversary of Mahatma Gandhi. Various cultural programmes, events and functions are held in schools and colleges across the country with students paying tributes to Bapu, the Father of the Nation. Young children dress up as Mohandas Karamchand Gandhi in schools and talk about his works and principles. Educational institutions often conduct essay writing competition on Gandhiji to make children aware of the contribution of the Father of the Nation in driving British out of India. Schools also hold speeches and elocutions on varying subjects related to the life of MK Gandhi. And as Gandhi Jayanti 2019 is a day away, we have compiled a list of essay topics on which kids can elaborate in their school on Gandhi Jayanti.

The United Nations General Assembly observe October 2 as the International Day of Non-Violence commemorating Gandhi's values and principles. The day seeks to "disseminate the message of non-violence, through education and public awareness". Gandhiji led the freedom struggle in India making people aware of their rights to fight back an alien rule in the country. He also pioneered various protests against social evils and superstitions creating awareness among the people. Children can speak or write on a variety of topics related to Gandhi. From pioneering the freedom struggle, breaking societal norms and taboos to his non-violent and peaceful approach, you can touch upon various topics. Gandhi Jayanti 2019 Messages in Hindi: WhatsApp Stickers, Facebook Greetings, GIF Images, SMS, Quotes and Wishes to Send on Mahatama Gandhi's 150th Birth Anniversary.

(The above story first appeared on LatestLY on Oct 01, 2019 02:08 PM IST. For more news and updates on politics, world, sports, entertainment and lifestyle, log on to our website latestly.com).