Guru Arjan Dev Ji Martyrdom Day 2021: Five Things To Know About the Fifth Guru of Sikhs on His Shaheedi Diwas

Guru Arjan Dev Ji Martyrdom Day 2021 will be observed on June 14, 2021. Here we have compiled 5 important things about the fifth guru of Sikhs. 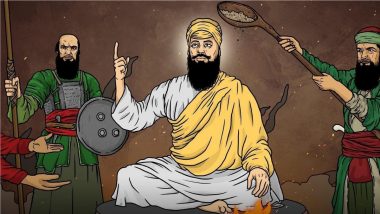 In 1606, Guru Arjan Dev was captured by Mughal Emperor Jahangir. The Mughal emperor imprisoned Guru Arjan Dev in Lahore Fort because of his increasing spread of Sikhism and also for his major influence among people. It is also believed that Jahangir ordered Guru Arjan Dev’s execution after he blessed the emperor's rebellious son Khusrau, which outraged the emperor. The guru was made to sit on a burning hot sheet or plate and hot sand was poured on him. He was taken for a bath in the river, after five days of torture. He was never seen again after he entered the river.

(The above story first appeared on LatestLY on Jun 14, 2021 07:00 AM IST. For more news and updates on politics, world, sports, entertainment and lifestyle, log on to our website latestly.com).