January 2019 Festivals, Events and Holiday Calendar: Makar Sankranti to Lohri to Republic Day, Know All Important Dates and List of Hindu Fasts for the Month

Post the celebrations of harvest festivals, Republic Day on January 26 will see a big celebration across the country. It will be 70th Republic Day of India after celebrating in 1950 for the first time. 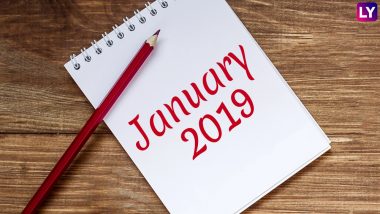 January is probably the most-special month. It is the first month of the year. We indulge in celebrations right from the very first day as it marks the beginning of the New Year. January 2019 is no different. We have a plethora of significant events, thanks to religious and national festivals falling this month. And, of course, there are a number of Hindu fasts that make us call India, the land of fasts and festivals. So, get ready to celebrate Makar Sankranti, which by the way will be celebrated on January 15 and not 14 this year. Pongal, Lohri, and Uttarayan will also be celebrated in the same week of the month. January 26, 2019, will mark India’s 70th Republic Day celebrations. Let us look at the January 2019 calendar in detail, the important days and events to commemorate, along with religious festivals, birth and death anniversaries. Calendar 2019 For Free Download in PDF: Know List of Hindu Festivals, Holidays, Fasts According to Drik Panchang, Kalnirnay, Lala Ramswaroop Calendars Online.

The first week of January 2019 will see major Hindu fasts observed on a monthly basis. Saphala Ekadashi Vrat in honour of Naaraayana (Lord Vishnu) will be observed on the first of January. On January 3, Pradosha Vrata of Krishna Paksha Pradosham and Masik Shivaratri will be observed. Paush Amavasya or Margashirsha Amavasya Vrat will be kept by devotees on January 5, 2019. According to the Vishnu Dharma Shastra, it is believed that if Shraddha rituals are offered to one’s ancestors, it brings them peace in the afterlife. The second week of January does not have many significant observances.

The third week of the month, Swami Vivekananda Jayanti will be celebrated on January 12, 2019. The birth anniversary of the great Hindu monk is observed as the National Youth Day in India since 1985. The Government of India had quoted on the significant observance 'the philosophy of Swamiji and the ideals for which he lived and worked could be a great source of inspiration for the Indian Youth.' Then on January 13, 2019, Guru Gobind Singh Jayanti, one of the significant Sikh festival commemorating the birthday of the tenth Guru of the Sikhs will be celebrated.

Post the celebrations of harvest festivals, Republic Day on January 26 will see a big celebration across the country. It will be 70th Republic Day of India after celebrating in 1950 for the first time. Subhash Chandra Bose Jayanti on January 23 and Mahatma Gandhi death anniversary on January 30 are key observances at a national level. Among the fasts (vrat or vratam), we will have Pausha Putrada Ekadashi Vrat, Pradosha Vrata (Shukla Paksha Pradosham), Sankashti Chaturthi and Shattila Ekadashi Vrat in the second half of the month.

(The above story first appeared on LatestLY on Jan 03, 2019 12:27 PM IST. For more news and updates on politics, world, sports, entertainment and lifestyle, log on to our website latestly.com).