Kamada Ekadashi 2021 Date And Significance: History, Shubh Muhurat, Vrat Katha And All You Need to Know About The Auspicious Day 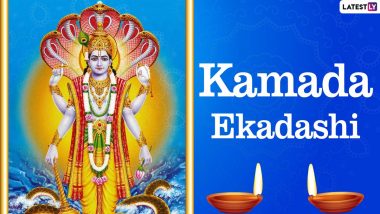 It is believed that observing the Kamada Ekadashi Vrat helps people to wash away all their sins. There are various folklores that are associated with the commemoration of Kamada Ekadashi that is also shared on this day. The legend about Kamada Ekadashi is said to be narrated By Lord Krishna to Yudhishtar in Varaha Purana.

According to this folklore, a young Gandharva couple, Lalit and his wife Lalita lived in the city of Ratnapura, a highly prosperous city decorated with gold and silver, which was ruled by the King Pundarika. They had made a mark in the field of arts. Lalit is said to be a singer while Lalita was a renowned dancer. During one particular performance, it is said that Lalit lost his attention for a few beats as he tried to look for his wife, who was absent from the court. When the king was informed about this, he was infuriated and curved Lalit to become a monstrous cannibal. Distressed by the entire ordeal, Lalita wandered the hills where she came across sage Shringi who asked her to observe the Kamada Ekadashi Vrat atone the sins of her husband. When she reverently completed the fast, Lord Krishna restored Lalti to his normal gandharva form.

Since then people have been observing the Kamada Ekadashi fast to ask for penance and forgiveness for all their sins. Many people also head over to temples to offer their prayers to Lord Krishna. We hope that this Kamada Ekadashi brings with it an opportunity for a happy and prosperous life.

(The above story first appeared on LatestLY on Apr 22, 2021 09:50 PM IST. For more news and updates on politics, world, sports, entertainment and lifestyle, log on to our website latestly.com).