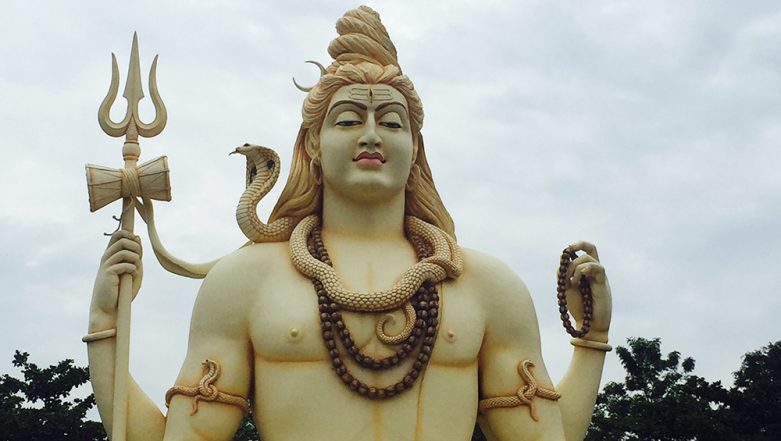 Maha Shivaratri is celebrated with great pomp and fanfare across India. The celebrations on this day are associated with several stories about Lord Shiva, also known as ‘The Destroyer of Evil’ in the Hindu trinity. According to Hindu mythology, Mahashivratri marks the wedding of Lord Shiva to Goddess Parvati. In 2019, the auspicious day is being celebrated on March 4. On this auspicious day, devotees throng to temples of Lord Shiva to take blessings of Mahadev since the break of the dawn. The celebrations continue till late at night while many devotees also hold a day-long fast.

In Hindu mythology, there are several stories and beliefs associated with this auspicious event. The festival of Mahashivaratri is the main Hindu festival among the Shaiva Hindu diaspora from Nepal and India. Devotees offer bael leaves, milk and honey to 'Shivling' and chant the name of the Lord. As per Hindu calendar, Maha Shivratri is celebrated on the 13th night and the 14th day of the Phalguna month, which usually falls in February and March. Mahashivratri 2019: Know About 12 Jyotirlingas and How to Visit These Sacred Shiva Temples Located in India This Maha Shivaratri.

Shiva, also referred to as 'Mahadeva', is one of the famous deities of Hinduism. He is known as "The Destroyer" within the Trimurti, the Hindu trinity which includes the Brahma and Vishnu. Lord Shiva is the supreme being within Shaivism, one of the major traditions within contemporary Hinduism. In Shaivism tradition, Shiva is the supreme being who creates, protects and transforms the universe. As we celebrate MahaShivaratri on March 4 this year, we have compiled a list of the tallest Shiva statues in India. Mahashivratri 2019 Vrat Time & Puja Vidhi: Know About the Shubh Muhurat to Perform Maha Shivaratri Puja on The 'Great Night Of Shiva'. 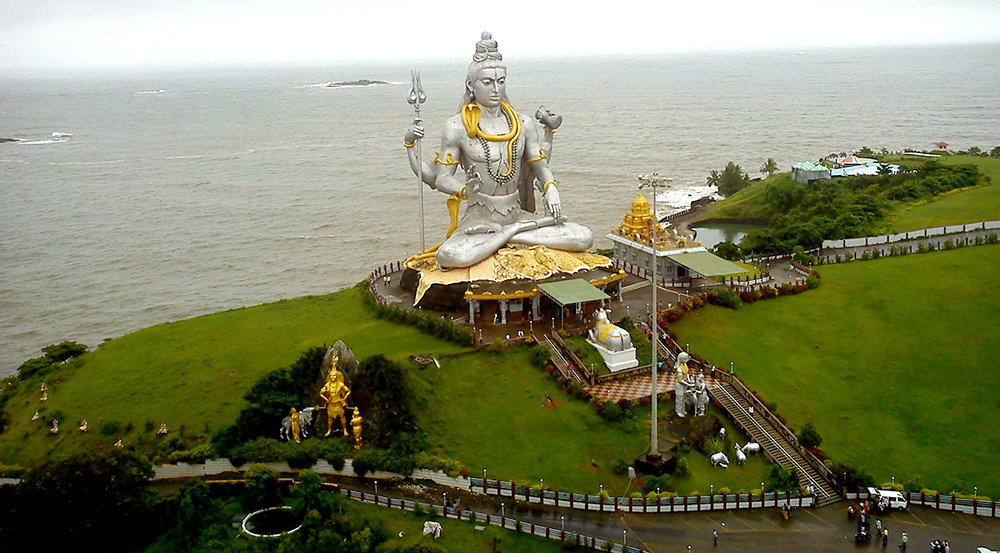 This is the second tallest statue of Lord Shiva in the world and the tallest statue of Shiva in India. The huge towering statue of Shiva is visible from great distances. The statue is 123 feet (37 m) in height. The statue was built by Shivamogga's Kashinath and several other sculptors, financed by businessman and philanthropist Dr. R.N. Shetty, at a cost of approximately Rs 50 million. The idol is designed such that it gets the sunlight directly and thus appears sparkling. Mahashivratri 2019: Reasons Why Lord Shiva is a Favourite God Amongst All! 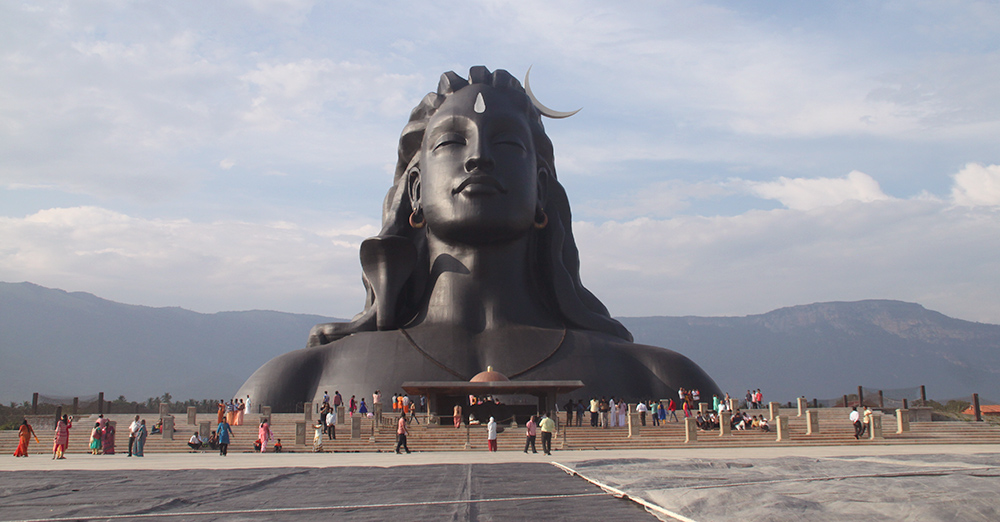 This is the largest and tallest face in the world, made up of 500 tonnes of steel. The height of 112 feet symbolically denotes that Adiyogi gave 112 ways to explore the human system. The statue has been recognized by the Guinness World Records as the "Largest Bust Sculpture” in the world. The height of the statue, 112 ft (34 m), symbolizes the 112 possibilities to attain to moksha (liberation) that are mentioned in yogic culture. Prime Minister Narendra Modi had unveiled the statue on 24th February 2017.  Mahashivratri 2019: Visit These Lord Shiva Temples in India to Witness The Best of Maha Shivaratri.

The Shiva statue at Har ki Pauri in Haridwar 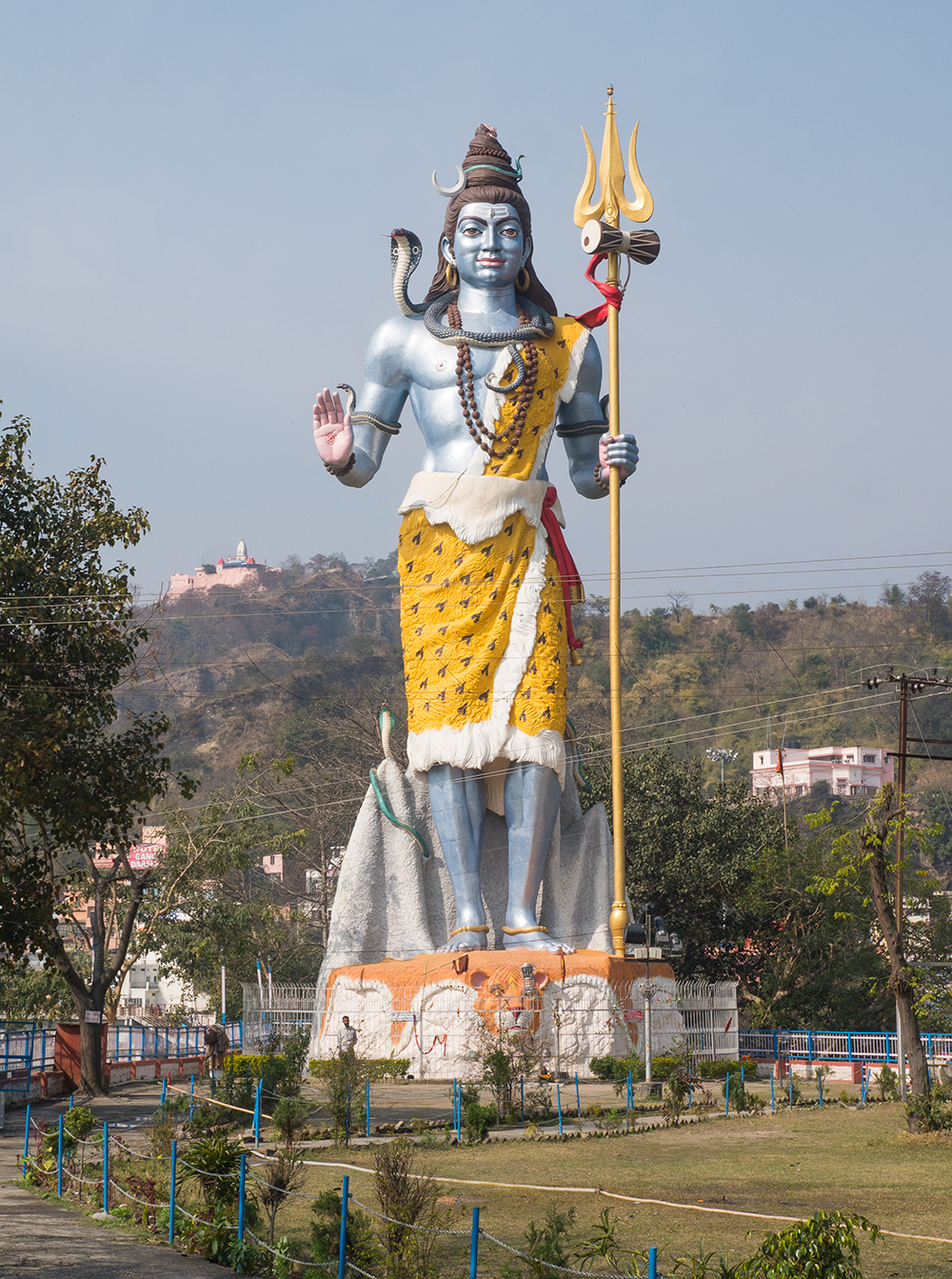 The famous 100-feet statue at Har Ki Pauri, a famous ghat on the banks of the Ganges in Haridwar is very famous. In literal sense "Har" means "Lord Shiva" who is the god according to shaivite Rishav Bhagwan school of Hindu theology, "Ki" means "of" and "Pauri" means "steps". Lord Shiva and Lord Vishnu are believed to have visited the Brahmakund in Har Ki Pauri in the Vedic times.

Shiva Statue in Kachnar City of Jabalpur in Madhya Pradesh 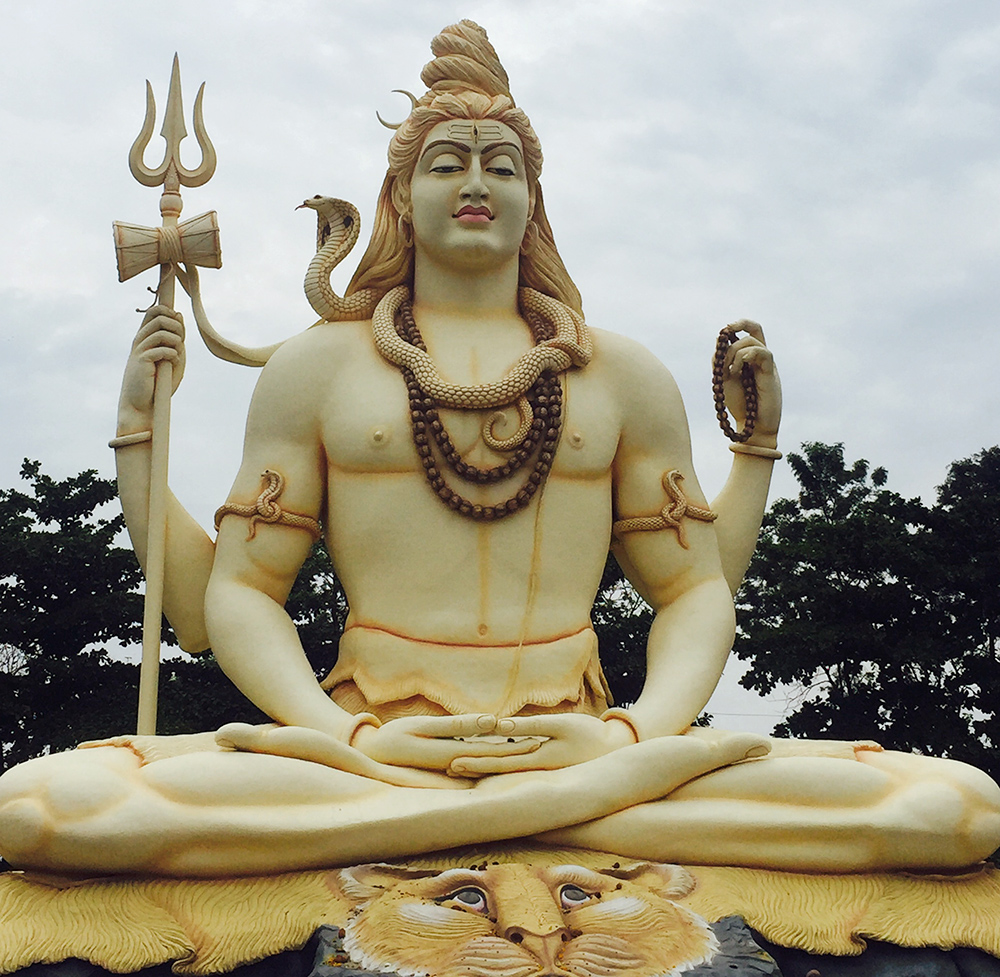 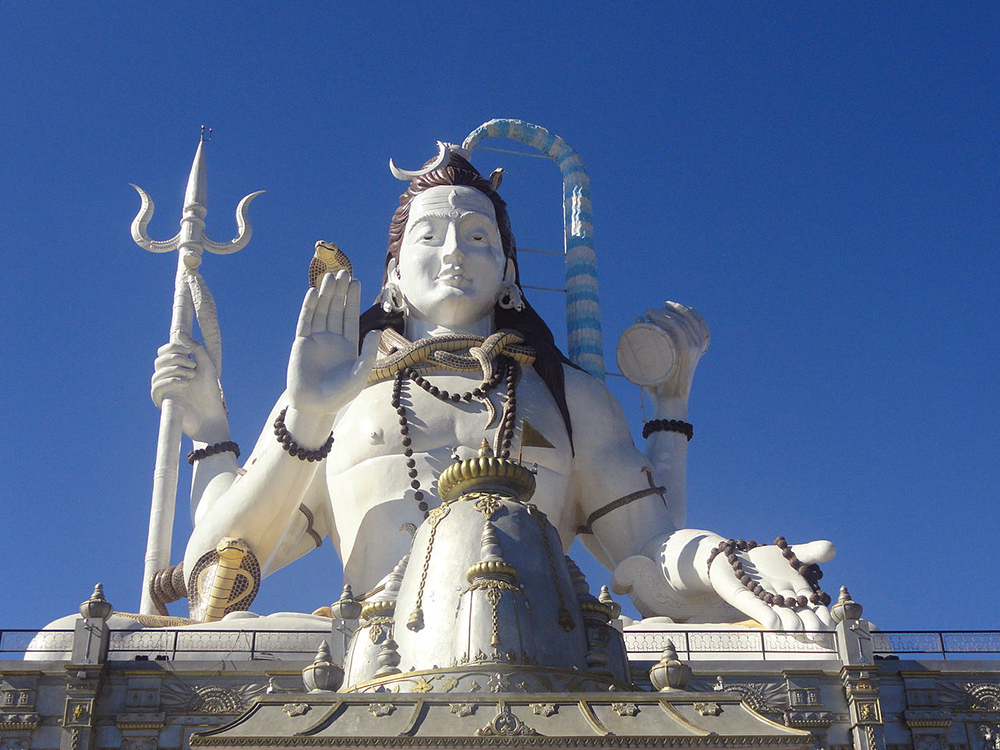 The 108 feet, gigantic statue of Lord Shiva in sitting posture, enclosed with twelve Lingas (temples) spread all over India is the major attraction of this place. Siddhesvara Dham is situated atop Solophok hilltop and has a 108 ft tall statue of Shiva, replicas of 12 Jyotirlingas, models of sacred Chardham Hindu Temples of Jagannath, Badrinath, Dwaraka and Rameswaram and a 18-feet statue of Kirateshwar a hunter incarnation of Shiva. Mahashivratri 2019: DO NOT ANGRY Lord Shiva By Offering These Five Things.

Shiva Statue in Shivagiri of Bijapur in Karnataka 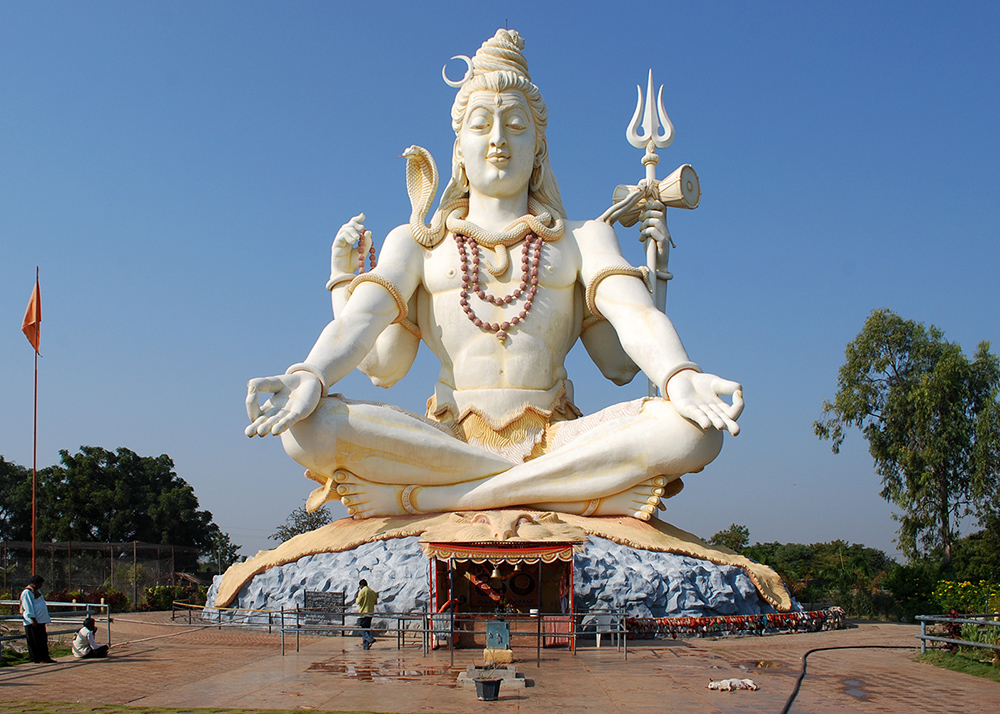 The tallest Lord Shiva statue is in Nepal, known as the Kailashnath Mahadev Statue. It is second tallest Hindu deity after Garuda Wisnu Kencana Statue in Bali in Indonesia. The statue is 143 feet (43.5 m) in height was made using copper, zinc, concrete, and steel. Mahashivratri 2019: Mythological Legends & Stories Associated With The Celebration of Maha Shivratri.

The auspicious occasion of Mahashivratri also marks the culmination of the Kumbh and the prominent bathing days. This year in 2019, Mahashivratri is falling on a Monday the day dedicated to Lord Shiva. Shiva is usually worshipped in the aniconic form of Lingam. Shiva is a pan-Hindu deity, revered widely by Hindus, in India, Nepal and Sri Lanka.

The iconic attributes of Shiva are the serpent around his neck, the adorning crescent moon, the holy river Ganga flowing from his hair, the third eye on his forehead, the trishula or trident, as his weapon, and drum (damaru). The festival, also known as 'the great night of Shiva', also celebrates the overcoming of darkness and ignorance, marking the beginning of spring.