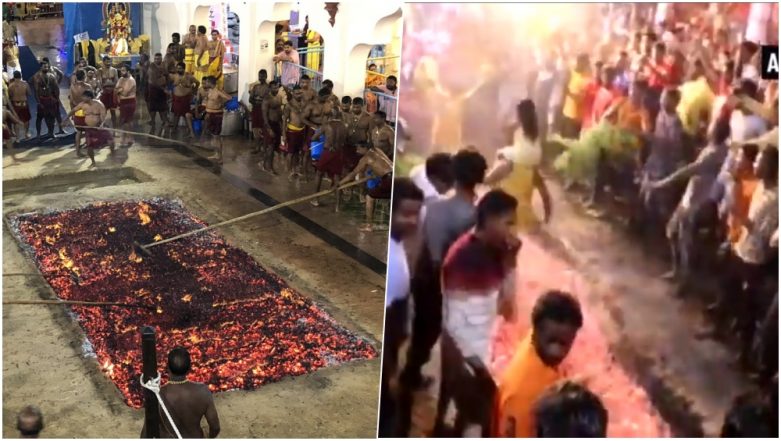 A three-day Mother Mariamma Mela 2019 took place in Jalandhar in Punjab from May 11 and concluded on May 13. Organised by the South Indian Welfare Society it is a fair of Tamil Goddess Mari or Maariamman. Also called as Mother Mari or Mariaai, she is the goddess of rain especially popular in regions of Tamil Nadu and around. During the fair, over hundreds of devotees walk over a bed of hot embers.  Govardhan Puja 2018 Celebrations: Villagers in Ujjain Crushed Under Cattle's Feet in Weird Ritual for Goodluck and Prosperity, Watch Shocking Video!

The burning coal is kept in a pit about 30-feet long and 3-feet wide and people walk over it barefoot as a mark of worship. A video of the same has been shared online. Goddess Mari is closely associated with goddess Parvati and Durga. According to many popular beliefs, she is also said to be an incarnation of Goddess Kali.

Festivals honouring Mother Mariamma are held during the summer/early autumn season of "Aadi". Along with bringing rains, people also worship this goddess for curing diseases like cholera, smallpox, and chicken pox. A three-day fair was held in Jalandhar in Punjab at Qaji Mandi.

As we can see devotees are enthusiastic about walking over the pit of hot embers. Some are even seen taking part in this dangerous practice of faith with a child. As the video shows, some people are seen running over the hot coal carrying a child along. This Mother Mariamma Mela takes place in the Tamil community here for several years.